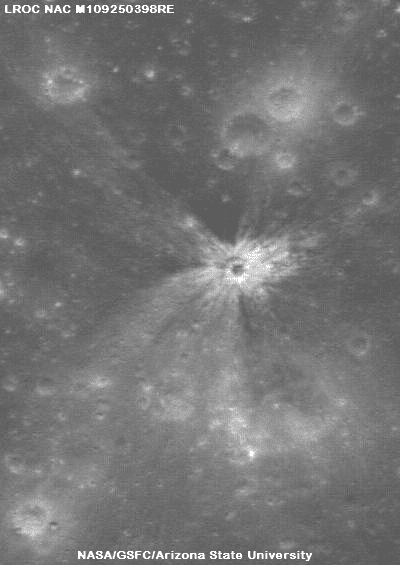 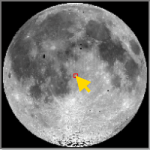 As follow up on the LROC Featured Image of the Constellation program Region of Interest in northeast Alphonsus on April 2, we decided to add still more about the nearby impact of Ranger 9, March 24, 1965.

It's all but certain the LROC team deliberately aimed the Narrow Angle Camera at the forty-five year-old impact as part of it's mission goals of detailing the fifty Constellation sites and locating artifacts of the first era of lunar exploration.

Using the LROC image search browser and judging by the designation of one high-sun image of the area as a "target of opportunity" (and a deliberate roll maneuver of the LRO by 2 degrees for the session on October 3, 2009, we decided to it was worth the search through the upper middle of M109250398RE. And we think it paid off.

Judging by the relative size of Ranger when compared to later Saturn V SIVB stages, for example, already highlighted in earlier LROC releases, we were not absolutely certain what this much smaller impact would look like, though we had those clues. And we had an idea that we would probably recognize Ranger 9's footprint when we saw it.

A look at M109250398RE shows a lot of bright signatures but nothing quite so fresh as the tight scene above. If this is Ranger 9's last stop, it's a wee bit more spectacular than we had hoped. Then again, our "back of the envelope" math indicated Ranger 9 hit the Moon at a relative velocity of 2600 meters per second, based simply on it's having closed the last 700 kilometers of it's journey in 270 seconds.

A quick study of the candidate site above shows, at the very least, a very fresh impact, perhaps a direct hit within a larger and much older 8 meter crater of a type very common to the area within Alphonsus. The object excavated a lot of material in gossamer spirals hundreds of meters over the older crater rim, and it may also have punched through to some much darker material below the surface.

Some of the best digging needed to find the history of the Moon and our star system (near where the Earth has also been during this long stretch of time) has already been accomplished by impacts, and in a few far rarer cases impacts set into motion by humans. Astronauts might have broken more than a few drill bits getting down to this level.

(Adding a more personal note, Ranger 9 (as I hinted earlier) was closely followed during its long plunge to the Moon's blaster surface. It was all very inspiring to at least one young American boy who saw the whole thing on his eighth birthday.) 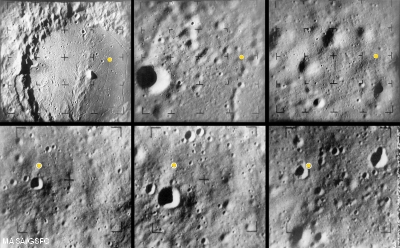 From 700 kilometers down to less than 7, in 270 seconds, Ranger 9, the last of NASA's hard-impact trailblazers confirmed, once again, what it's immediate predecessors had been showing. The Moon looked much the same at very different altitudes, indicating the surface had experienced crater saturation. The images, concentrated on it's eventual target, indicated by the yellow spot, are progressively closer to the Moon, moving from left to right across the top, then bottom rows. (Click HERE for Mastin's full size version of the above montage.) [NASA/GSFC/NSSDC.]
Posted by Joel Raupe at 11:51 PM

Many institutions limit access to their online information. Making this information available will be an asset to all.

Cool! Author the best! Thank you!