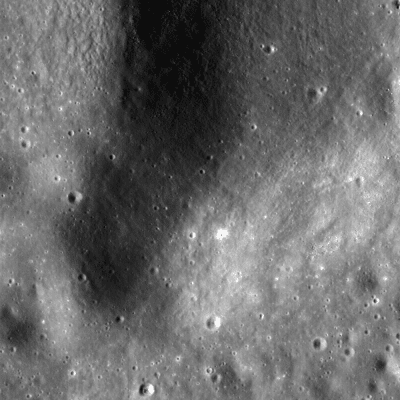 Summit crater of Hortensius Dome Phi. Summit craters of all the Hortensius Domes show no raised rims and are not circular, indicating they are not impact craters, rather that they are analogous to volcanic calderas. Image width 1.22 km, LROC NAC image M104691278R [NASA/GSFC/Arizona State University]. 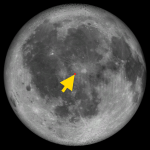 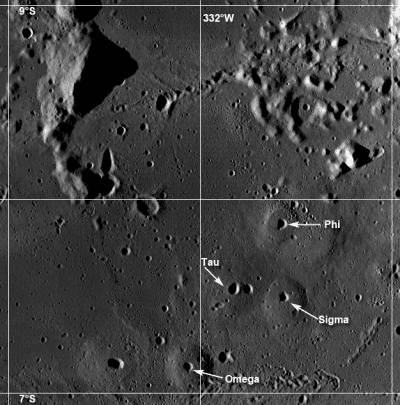 The formation of mare domes is thought to be related to eruptions of more viscous and more silicic lava than normal mare basalts, intrusions of shallow laccoliths, or mantling of large blocks of older rocks with younger lavas. These domes probably formed during the later stages of volcanism on the Moon, which is characterized by a decreasing rate of lava extrusion and comparably low temperature eruptions. This eruption style contrasts the emplacement of early stage, high volume, high temperature fluid mare basin deposits. Lunar mare domes, like the Hortensius domes, are distinctly different from non-mare domes like those found in the Gruithuisen region, which have much steeper slopes and higher albedo. The Hortensius Domes are poorly understood, and visiting this region will shed more light on the development of volcanic domes on the Moon, the nature of the changes in eruption rates, as well as returning valuable mare basalt samples from an easily accessible nearside location. 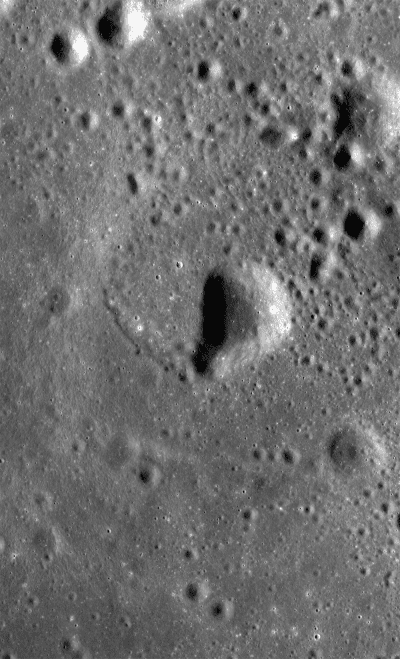 Oblong summit crater (center) of Hortensius Phi. This area matches the image shown in the NAC stereo DEM in the next figure. Note how difficult it is to see the low relief of the dome above the surrounding plains. LROC Image M104691278R, width = 6.1 km [NASA/GSFC/Arizona State University].

Due to the low relief of the Hortensius Domes, it is difficult to determine their exact dimensions (diameter, height) using normal photo-geologic techniques, such as shadow measurements. LROC Narrow Angle Camera (NAC) stereo images provide the means to derive high resolution topographic maps. Color shaded Digital Terrain Models (DTMs) can be created from the topographic measurements that highlight the differences in elevation between the summit crater and the surrounding plains of Mare Insularum. Using such high resolution models, comparisions of dome diameter, dome height, summit crater diameter, and crater depth can be made with other mare and non-mare domes on the Moon, as well as with terrestrial features, such as shield volcanoes. For more information regarding the use of NAC stereo DTMs and for measurements on lunar domes, see this 2010 Lunar and Planetary Science Conference abstract from S. Braden et al. 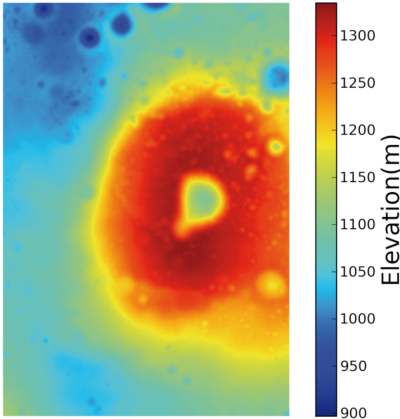 For more information on LROC's observation campaign for the Constellation Regions of Interest refer to this Lunar and Planetary Science Conference abstract, or visit the LRO Science Targeting Meeting Website.

Explore the Hortensius Domes Constellation region of interest for yourself.
Posted by Joel Raupe at 1:05 AM