LROC: Each crater tells a story 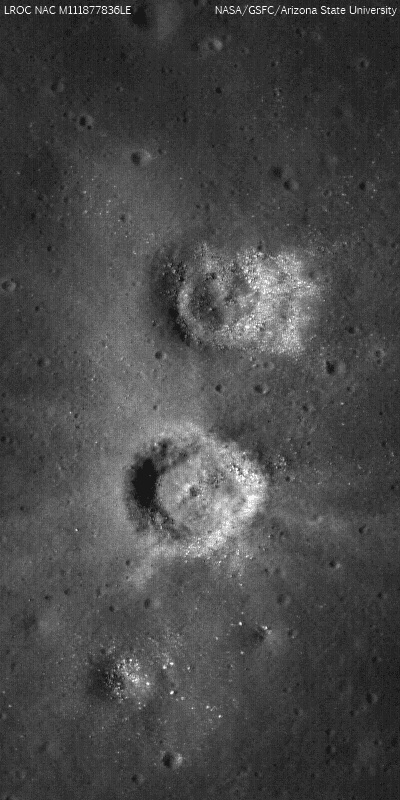 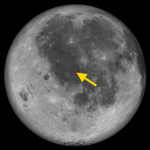 Browsing around the Flamsteed Constellation Region of Interest (ROI), you might notice that a lot of the craters here have odd features, including flat floors, raised floors, or rings that look like one crater nested within another. In the image above, the crater in the middle top displays a ring within its main (degraded) rim, and the crater just below it has a flat floor, compared to the typical bowl-shaped craters in the surroundings. These type of features occur when a crater forms partly in rocky material and partly in regolith. The term regolith refers to all of the fragmental material - dust and rocks of all sizes - that covers the Moon's surface and is created by impact events which continually pulverize the bedrock. When planning for lunar surface activities, engineers were concerned that this dusty, sandy surface wouldn't be stable for the spacecraft and Apollo astronauts that were to land there, so scientists worked out methods to estimate the thickness of the regolith ahead of time. Using images from Lunar Orbiter and laboratory experiments with a high-velocity vertical gun, a relationship between regolith thickness and the shape of a crater was developed. If the regolith is thin compared to the depth of the crater, the crater forms an inner ring. If the regolith is a little thicker, the crater develops a flat floor, and if thicker still then the crater is bowl-shaped. 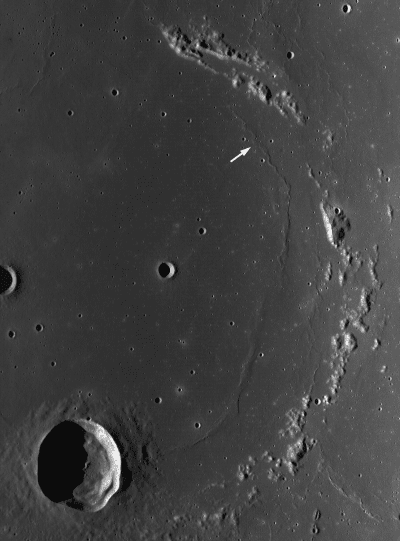 WAC monochrome observation of the Flamsteed Constellation Region of Interest. Arrow indicates location of NAC image above and Flamsteed crater (20 km in diameter) is at the lower left. Scene width is 87 km; image M117779352ME [NASA/GSFC/Arizona State University].
The crater shapes in the Flamsteed Constellation Region of Interest demonstrate that the regolith is very thin (on average just a couple meters thick). This is because this is the site of some of the youngest volcanism on the Moon, and since the surface is younger, it hasn't had as much time to get beat up by impacts. Visiting this site with human explorers would provide a good opportunity to sample the bedrock beneath this thin regolith, and could give insight into the duration of volcanic activity on the Moon, and the evolution of lunar volcanism as the Moon aged and cooled.

Astronauts could also visit the nearby Surveyor 1 site and check on the condition of America's first soft lander.
Explore the Flamsteed Constellation region of interest for yourself! 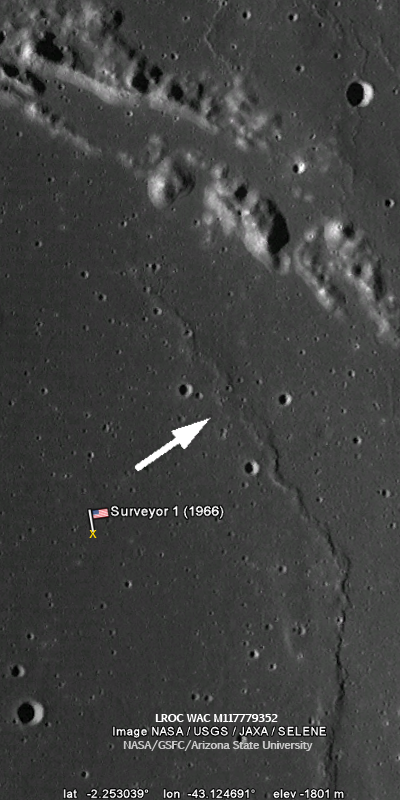 A medium range glance at this latest LROC release of the Wide-Angle Camera (WAC) image M117779352ME detailing the Constellation Region of Interest within the "ghost-ring" of Flamsteed P, demonstrates the proposed Landing Zone (arrow) is only 9.87 km northeast of Surveyor 1, site of America's first soft-landing on the Moon (2.5°S, 316.8°E), June 2, 1966. As mentioned above, the LROC team first posted a close-up Narrow-Angle Camera (NAC) image of the Surveyor 1 spacecraft, as their Featured Image last September 30, HERE [NASA/GSFC/Arizona State University/Google Earth v.3].
Posted by Joel Raupe at 11:24 PM