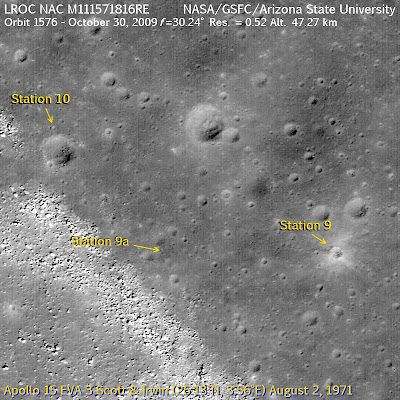 The third and final EVA of Apollo 15 brought the astronauts to the edge of Hadley Rille (lower left in this sample swept up by the LROC narrow-angle camera on board NASA's Lunar Reconnaissance Orbiter in polar orbit 47 kilometers overhead, last October). Disturbed regolith is observed along the crater rim at Station 9 and at the edge of the rille at Station 9A. Rover tracks are visible between stations 9A and 10 (and elsewhere). For perspective on the sample above, click here. Sample width represents 520 meters, at 52 centimeters per pixel (LROC NAC M11171816R) [NASA/GSFC/Arizona State University].
Brent Garry
LROC News System 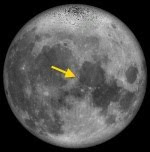 The Apollo "J" missions were designed to allow the crews to stay and work longer on the Moon's surface and included a Lunar Rover so they could explore several kilometers away from the Lunar Module. Hadley Rille and the Apennine Mountains provided a dramatic backdrop for the first Apollo "J" mission.

Over the course of 3 EVAs (Extra-vehicular Activities), aided by the first of the three lunar rovers Scott & Irwin covered a total distance of ~28 km (17.4 miles), collected ~77 kg (~170 lbs) of lunar samples and spent 18.5 hours exploring the Moon's surface. 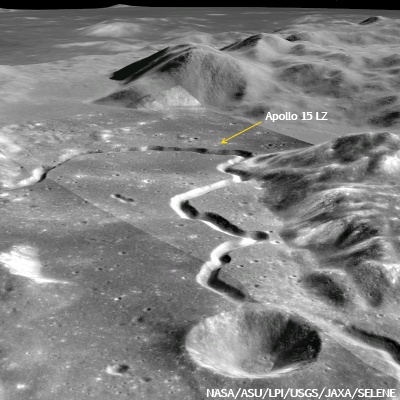 A favorite target for earthbound observers, the Hadley River Delta region is contiguous to the Apennine Range, an outer rim of the milestone Imbrium impact event, and source of Palus Putredinis, the "Marsh of Decay," a relatively dark oblique triangle-shaped plain of material on edge of the vast Imbrium basin to the west-northwest. Repeatedly photographed from orbit, modern surveys recommenced with Terrain Camera data gathered by Japan's Kaguya (SELENE-1) orbiter in 2008. That detail, represented in the image above was limited to 5 meters per pixel, insufficient to fully resolve the Apollo 15 descent stage, definitively imaged in 2009 by the LROC team using the narrow-angle camera on-board LRO. [Google Earth v.5].
The LROC Narrow Angle Cameras (NAC) have provided images with 50 cm/pixel resolution of the Apollo 15 landing site. In previous posts, we have shown the Lunar Module descent stage, Lunar Rover, Apollo Lunar Surface Experiment Package (ALSEP) instruments, and darkened paths of regolith disturbed by the crew and the rover. Here, we focus on what the crew accomplished at two locations away from the immediate landing site, accompanied by transcribed voice transmissions describing their discoveries and observations.
EVA 2: Station 7 – The Genesis Rock 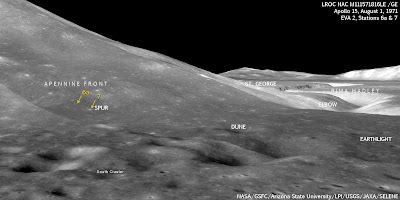 Full Image Above HERE.
Station 7 is at Spur, a 90 meter crater on the slope of the massif to the south known as Mount Hadley Delta. The crew parked along the northeast crater rim (on the downslope side) where they could sample the ejecta blanket. This station is now famous for the collection of "the Genesis Rock," the 4 billion year old sample of anorthosite representative of the original lunar crust. Scott & Irwin's excitement at the discovery is evident in the transcription: 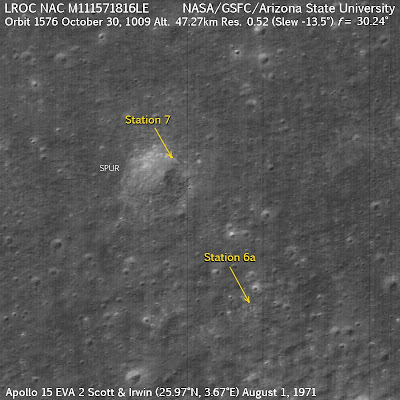 The Genesis Rock was collected along the rim of Spur at Station 7. The arrow above points to disturbed regolith along the crater rim and rover tracks are visible south of the boulder at Station 6A. This sample from LROC NAC frame M111571816LE is 520 meters in width; north is at top [NASA/GSFC/Arizona State University]. 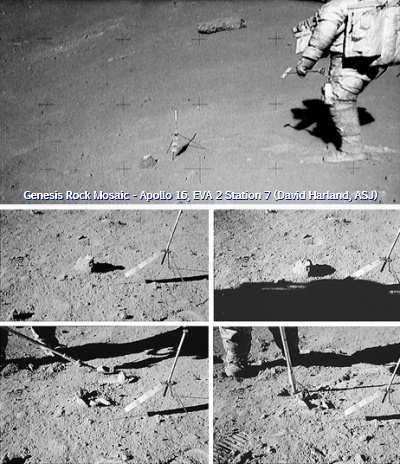 The Genesis Rock presented itself in situ on the top of a pedestal, "as though it had been waiting for someone to retrieve it." Scott & Irwin, aware on sight of the sample's potential scientific values, were careful to photograph the find both before and after retrieval [Mosaic of Genesis Rock "before" and "after" photos, assembled by David Harland/ALSJ]. 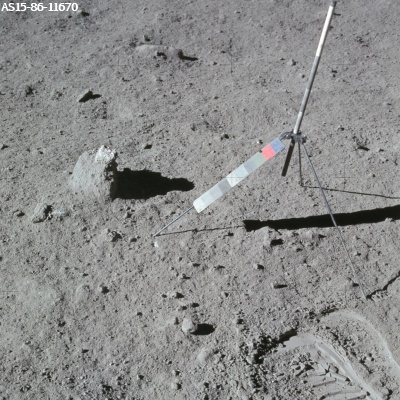 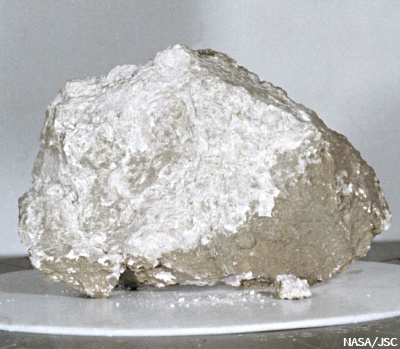 Images of the Genesis Rock (left of the gnomon) just prior to collection and later on Earth, cataloged where it continues to be studied extensively at the Lunar Sample Bldg. at the Johnson Space Center in Houston. [NASA].
EVA 3: Station 9A - Observations of Hadley Rille

The last EVA allowed the crew to explore the edge of Hadley Rille. Pans at Stations 9 and 10 show two different craters the crew visited; one of which is a fresh crater with a blocky texture. 10Station 9A was a terrace that allowed Scott and Irwin a chance to peer down into the rille, which is approximately 1.3 km wide and 400 m deep along most of its length. 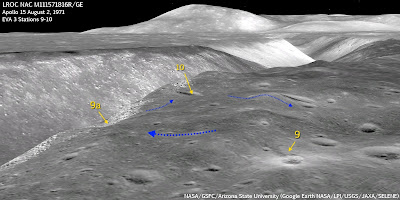 EVA-3 Stations 9-10, in perspective, at full-size, HERE.
The crew was able to observe and photograph bedrock along the upper part of the western rille wall. Test pilots by profession, the crew went through extensive geology training so that they could communicate their observations effectively and efficiently to the Science Backroom in Houston, Texas. Most of us are familiar with different historic phrases from various Apollo missions. What is sometimes forgotten is that there was also a great deal of science being accomplished and discussed. Field geologists normally have a field notebook to write down and draw their observations in, but on the Moon everything has to be described verbally. Here is an example from Commander Scott's geologic description of the rille wall at this location and one of the images that corresponds with it. Compare his description with the photograph and this panorama.

165:22:50 Scott: I can see from up at the top of the rille down, there's debris all the way. And, it looks like some outcrops directly at about 11 o'clock to the Sun line. It looks like a layer. About 5 percent of the rille wall (height), with a vertical face on it. And, within the vertical face, I can see other small lineations, horizontal about maybe 10 percent of that unit.
165:23:26 Scott: And that unit outcrops (at various places) along the rille. It's about 10 percent from the top, and it's somewhat irregular; but it looks to be a continuous layer. It may be portions of (mare basalt) flows, but they're generally at about the 10-percent level. I can see another one at about 12 o'clock to the Sun line, which is somewhat thinner, maybe 5 percent of the total depth of the rille. However, it has a more-well-defined internal layering of about 10 percent of its thickness. I can see maybe 10 very well-defined layers within that unit. 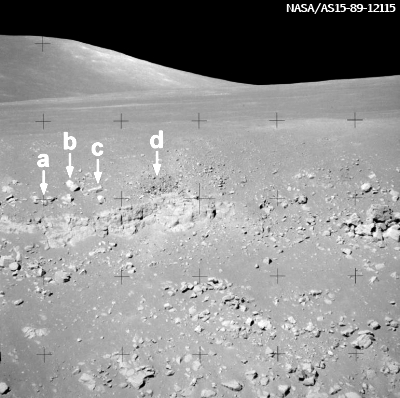 Outcrop of basaltic lava exposed along the western wall of Hadley Rille. Photographed from Station 9A. Letters point to rocks seen in the LROC NAC frame below. Apollo 15 image AS15-89-12115 [NASA]. 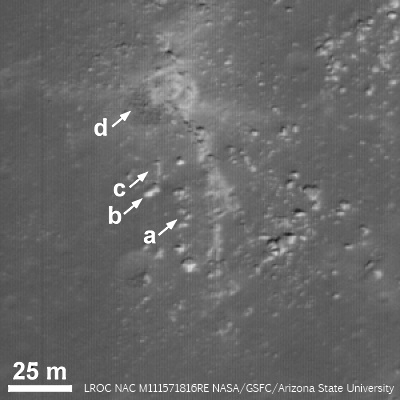 The same outcrop photographed by Apollo 15, along the western wall of Hadley Rille as shown above, from an "aerial" perspective in this sample of LROC NAC frame M111571816RE. The letters point to the same rocks in the image taken from the ground in 38 years, 2 months and 28 days earlier. (The outcrop is ~75 m long.) [NASA/GSFC/Arizona State University].

The high resolution imagery from LROC allows us to retrace the steps of previous Apollo missions. Compare the Apollo 15 surface panoramas at the different stations with the LROC images to see if you can locate some of the individual rocks and outcrops seen in both perspectives.

Future crews that explore Hadley Rille and the Apennine Mountains could continue where Apollo 15 left off. Combining our previous exploration experience at the site with new remote sensing data sets, a new mission could explore the massifs to the north, additional sites along Hadley Rille, as well as revisit any of the Apollo 15 stations.

Explore the entire LROC NAC frame here and decide the spots you would like to explore on a future mission.
Read more about the Apollo 15 landing site in previous ASU posts:

Text from the corrected Apollo 15 transcript and links to panoramas are from the Apollo Lunar Surface Journal.
Posted by Joel Raupe at 10:48 PM

Something just struck me only the other day: Why aren't there any stars visible in any of the photos showing the sky? No atmosphere around it so you'd think they'd all be visible...?

Actually, there are stars visible in quite a number of the photographs taken by Apollo crews, although only one of those actual pictures accompanying this post shows sky. (A few of the maps illustrating this post were created using Google Earth and LRO photography. The Apollo stills are clearly marked).

The reason stars aren't normally visible in pictures taken by Apollo expeditions has to do with the speed of the film. The landscapes are so bright that film had to be fast reacting and the camera apertures and speeds had to fast too. To capture the pinpoint stream of photons coming from a star requires wide apertures and longer exposures that would have been overwhelmed by the bright surroundings. That's true even of pictures taken from spacecraft.

Even so, if you work with a lot of the high resolution pictures from the surface Apollo expeditions found in the Apollo Lunar Surface Journal you will occasionally see a genuine star or two, usually one of the planets, hiding dimly in the background black lunar sky.

Thanks Joel,
That makes perfect sense. Must admit, I allowed myself to be thrown by the conspiracy mongers and their theory that the Moon landing was a hoax ;D