The part of Apollo 13 that made it to the Moon 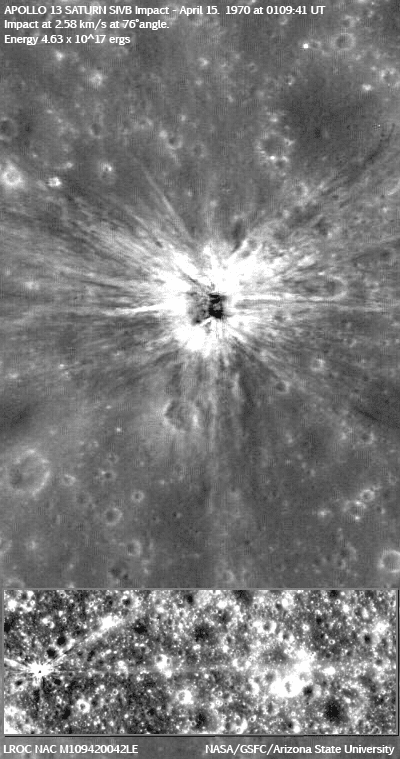 At least part of the Apollo 13 Saturn stack made it to the Moon, around the time Jim Lovell (on his second trip to the lunar vicinity) Rusty Swigert and Fred Haise were swinging around the Moon, preparing to use the Lunar Module descent stage to accelerate into an Earthbound re-entry window, the 3rd Stage that had propelled them out of Earth orbit slammed into the Moon. The guided impact successfully tested the seismometer left by Conrad & Bean the previous November. The SIVB came in at a steep angle (73 degrees), spreading a field of debris kilometers away, as seen in the smaller scale inset from LROC Narrow-Angle Camera image M109420042LE [NASA/GSFC/Arizona State University].
Posted by Joel Raupe at 2:39 AM

i've gone through this blog. i found it really interesting. nowadays im working and also studying in reputed college.

Afghan Hawaiian is a Sativa dominant hybrid (70% indica/30% Sativa) strain created as a potent cross between the hugely popular UK Cheese X Lavender strains. This dank bud boasts a moderately high THC level ranging from 18-22% on average and a myriad of both Indica and Sativa effects. Users describe the high as having an immediately uplifting onset that leaves you aroused, creative, and slightly dizzy. You’ll feel happy and euphoric before falling into a state of deep relaxation without loss of functionality. Due to these potent effects, Afghan Hawaiian is said to be an ideal strain for treating patients suffering from conditions such as neurological disorders and spasticity as well as muscle spasms and chronic pain. Afghan Hawaiian buds have small dense round popcorn-shaped neon green nugs with light gold undertones and translucent amber hairs.