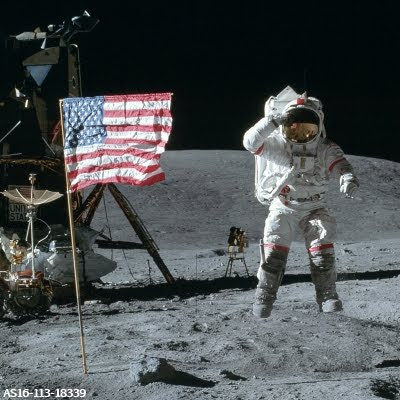 Early in the first of three EVA's on the Cayley Plain terrain between North Ray and South Ray crater immediately northwest of the Descartes Formation, Apollo 16 lunar module pilot Charlie Duke suggested the lighting and backdrop, including the U.S. flag and "Stone Mountain" beyond was a beautiful photo opportunity. After a moment of hesitation, the famously sedate Cmdr. John Young jumped up and Duke took this now-famous image [NASA/ALSJ]. As cataloged by Eric Jones in the indispensable Apollo 16 Lunar Surface Journal:

"120:25:42 John Young jumps off the ground and salutes for this superb tourist picture. He is off the ground about 1.45 seconds which, in the lunar gravity field, means that he launched himself at a velocity of about 1.17 m/s and reached a maximum height of 0.42 m. Although the suit and backpack weigh as much as he does, his total weight is only about 65 pounds (30 kg) and, to get this height, he only had to bend his knees slightly and then push up with his legs. In the (full) background, we can see the UV astronomy camera, the flag, the LM, the Rover with the TV camera watching John, and Stone Mountain. Journal Contributor Joe Cannaday notes that high-point of John's first jump was at a time close to 120:25:49 and the second was almost exactly three seconds later." 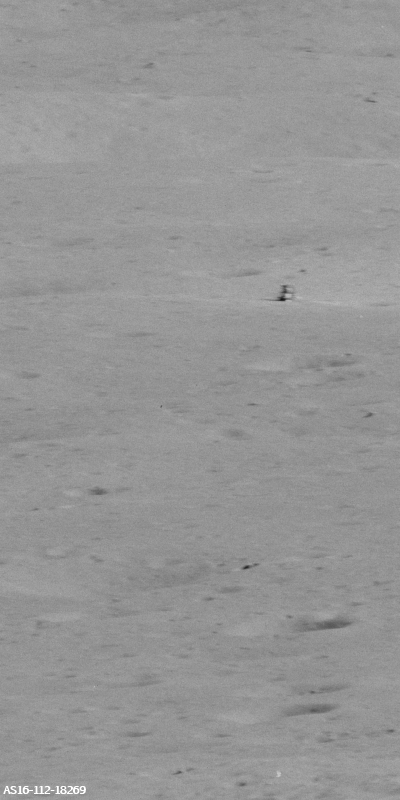 Up the slope of "Stone Mountain," near the southern terminus of their second EVA, April 22, 1972, Charlie Duke photographed the bright highlands plain below, all the way to the northern terminus at North Ray and Kiva craters he and Young would visit the following day. In this inset from one in the telephoto panorama, the lunar module is seen from a perspective directly opposite from that seen in the "tourist shots" taken the previous day.

Thirty Eight years ago today, Young and Duke began emerged on the Cayley Plains of the Moon northeast of Descartes and began three days of exploration. It's a good time to take advantage of the rich legacy of this second to last manned expedition to the Moon by sampling its still-studied science at the Apollo 16 Lunar Surface Journal.
Posted by Joel Raupe at 6:33 PM

Once again, I can't disagree with some of your points, and I consider the weight of historic evidence - particularly the personal testimony of the extraordinary individuals on the ground and in Cislunar Space between late 1968 and 1972 as some of the best evidence of the six manned surface expeditions to the lunar surface. I would be happy to review the evidence to the contrary, despite that high standard, but reserve the right to answer those points, and I would be willing also to say, if I can't offer an explanation for the scanty evidence for a contrary opinion, that "I don't know."

However, to be frank, just tossing out a few examples refuting the extraordinary nature of this amazing accomplishment, during an age of "rotary phone technology" for example, just adds to the awe I still (admittedly) feel for this project, but it's poor evidence, I think, that the missions were frauds.

By 1969 we had touch-tone phones in our house, at least, though this innovation was by no means universal. And so forth...

Having examined what "evidence" there is now almost universally available offering an opposing explanation, I don't think you've got much of a case. I think it takes more faith no to take the weight of evidence at face value. I would be more than happy to know how you reconcile these two schools of thought.