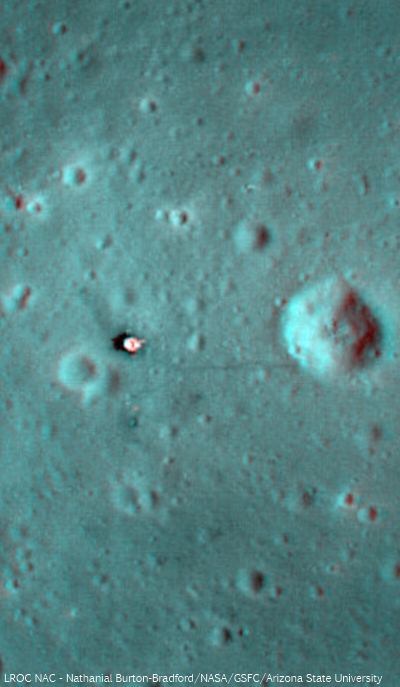 Earlier this week, Nancy Atkinson at UniverseToday brought to our attention some outstanding value-added work by Nathanial Burton-Bradford using dual LROC narrow-angle camera frames of Apollo landing zones, e.g., "Tranquility Base," imaged from slightly contrasting perspectives. It's raw material for his stunning 3-D views, posted on Flickr. Above, the year-old astonishing views of Buzz Aldrin's short stroll behind Eagle to the rim of West Crater is even clearer undisturbed and details like the Lunar Module foot pads stand out more readily than in the original releases. Opportunities abound for similar work, something already well demonstrated by the LROC team itself particularly in surveys of the Apollo 14 LZ.

Above, still missing is Apollo 11 U.S. flag, blown free, according to Buzz Aldrin when he and Armstrong departed. Such "value-added" views have shown the potential for using LROC NAC frames for further identifying compositional differences. Can you see any traces of something downrange from Eagle in Burton-Bradford's image of the Apollo 11 LZ that may, in fact, be the rudely treated original American flag?
"Foot-pads, foot prints and flag," etc. ? Well, perhaps not the First Flag at Tranquility Base (above). U.S. flags are identifiable in the LRO surveys of subsequent Apollo landing sites, but Buzz Aldrin's contention that the first of the six United States flags on the Moon was blown clear by the lunar module ascent stage exhaust is safely confirmed.

Film of their lift off, from on-board Eagle through Aldrin's view port showed the flag, planted too close those First Steps, was suddenly engulfed in a hurricane wind of hot gases as Armstrong & Aldrin started their ascent, July 21, 1969.

The camera was not as fast as Aldrin's eyes, of course. There are some still holding out hope that an obvious swirl of debris in subsequent frames seen blowing down stream held enough red reflecting foil and other fragments that might have been easily mistaken for the object Aldrin insists was the American flag; already a 100 meters off and rapidly tumbling away.

The flag's absence at Statio Tranquillitatus is a notable contrast with LROC surveys of the last American station on the Moon. The flag set up by Cernan & Schmitt in Taurus-Littrow valley, of course, was seen to be intact in the live television sweeps of the Apollo 17 station for hours after their departure. Next to nothing appears to have changed over the 38 years since.

But looks can be disturbing. Have the colors bleached to gray, as some believe? After LRO, approaching the artifacts, which have now become important Long Duration Exposure experiments, will require caution and planning, if any record of dust fallout, specific to each artifact's exact place on the Moon, valuable and fragile information, can be preserved.

The "best practice" approach should be from the ground and from a distance (probably greater than might be generally believed).

Today, we understand at least some of the dust uplifted by powered descents, like those of the Apollo missions, as well as some of the dust and debris "disturbed" by their departure actually reached escape velocity. Many more microscopic grains were propelled into ballistic paths at least as high as the Apollo CSMs standing by in orbit.

The first American flag was too heavy to have been blown so high and far, like nearly anything likely to be visible to the naked eye. The plume of exhaust gases rapidly dissipated, temporarily increased the weight and composition of the lunar exosphere by an appreciable percentage, as did each depressurization of the LM prior to EVA.

Tumbling along, losing energy fast, Apollo 11's flag is probably well within a half kilometer of the Apollo 11 descent stage. If it has been located, neither Dr. Robertson's team nor anyone else studying the LROC photography has announced it. Like finding Luna 9, the first soft-lander sent by the Soviets, it has already been photographed though, but it remains lost in crowded fields similarly-sized objects at the edge of resolution capabilities even of LROC's narrow angle camera.

(Some of us are never satisfied.)

Recent high-resolution photography from NASA's Lunar Reconnaissance Orbiter continues to dazzle, living up to the best expectations. A month after a first public release of nearly 40 terabytes of data, in the form of over 108,000 photographs, LROC has provided more than enough opportunities for original interpretations.

The Lunar Reconnaissance Orbiter Camera (LROC) team at Arizona State University, lead by Dr. Mark Robinson has somehow wrestled it all into a searchable online metadata search engine, requiring little more than a cursory understanding of the Moon and where things are there to be useful.

The lunar surface only seems as straight forward an object for study, with little atmosphere and presenting its well-illuminated surface unchanged over Ages tallied in the billions of years. But the truth is more magnificent. What Shakespeare summed up nicely as the "inconstant Moon" is the Rosetta Stone of our Solar System. 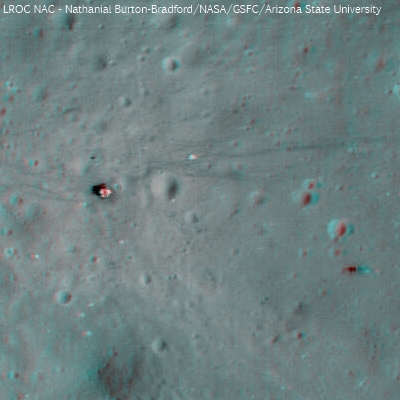 Useful as a functional 3-D image, with or without the 3-D glasses (though they help), Nathanial Burton-Bradford's value-added comparative contrast of two slightly differing perspectives of the immediate landing site of Apollo 17, each photographed by the LRO narrow-angle camera (NAC) flying in low lunar orbit on board NASA's Lunar Reconnaissance Orbiter.
A still (below) taken from the dramatic, poignant live feed from the suddenly-lonely, remotely-operated color television camera on Apollo 17's lunar rover, in the minutes after the Cernan & Schmitt's departure, December 14, 1972. Recent Narrow-Angle Camera (LROC) images from NASA's Lunar Reconnaissance Orbiter demonstrate Apollo-era artifacts on the Moon, including Apollo 17's lunar module descent stage, after more than 450 blistering lunar days and stone cold lunar nights, seem placidly undisturbed [NASA/A17-LSJ]. 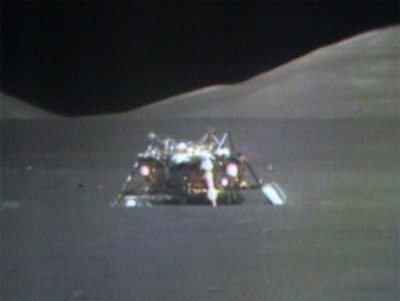