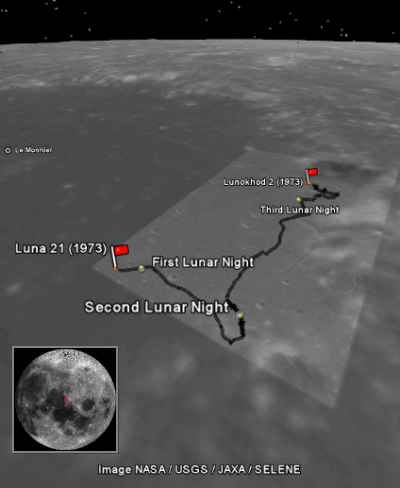 Garriott Crater? Even when a story is picked up and echoed in multiple corners of the Blogosphere, and may or may not be sprinkled with facts, doesn't make it true, especially but not exclusively on All Fools Day. Perhaps the video-mogul and space tourist from a family of astronauts does have a claim on this corner of the Moon. If so, his claim is staked between the Luna 21 lunar lander carrier and writ in the tracks of Lunokhod 2, with a location long-verified by laser reflection and most recently photographed in situ by the Lunar Reconnaissance Orbiter [Google Earth].
Richard Garriott now thinks the possibility of one day visiting the last rover to land on the Moon, which he bought for $68,000 in 1993, has gone from a zero probability to a long shot.

In 1993 Richard Garriott purchased the former Soviet Union's Luna 21 moon lander and its Lunokhod 2 moon rover at a Sotheby's auction for $68,000... Luna 21 landed on the lunar surface on January 15, 1973, and its Lunokhod passenger remained operational until May 9, when it accidentally rolled into a crater and was buried under dust, ending its mission.

[Ed Note: This last piece of information is definitely not completely accurate. The french-built lunar laser range reflector on Lunokhod 2 continues to return the occasional photon, defying the author's inference that the vehicle was "buried under dust."]

Or so it was thought. But last week, a camera on NASA's Lunar Reconnaissance Orbiter sent home pictures of the wayward rover, parked safe and sound on the surface of the moon. "It's great to actually have a contemporary photograph of my property on the moon," Garriott said. He's clearly thinking beyond just a unique piece of memorabilia, however; according to Space.com, he's also had "casual conversations with lawyers about international law and property rights on the moon."

"I think I can truly make the only private, legitimate claim to territory - at the very least around my rover and, potentially, along its point of travel, to give me some actual property rights on the moon," Garriott said. And while he admitted that his claim is "somewhat tongue in cheek," he added, "It is interesting speculation... And I think that there's already international framework to support that territorial claim."

Unfortunately for Garriott, Joanne Irene Gabrynowicz, the director of the National Center for Remote Sensing, Air and Space Law and Research Professor of Law at the University of Mississippi, said his claim is off-base. "A contention that buying a space object that landed on the lunar surface from a sovereign nation gives rise to a property right to the territory under it is wrong," she said. "The U.S.S.R. was and Russia is a party to the Outer Space Treaty. It did not acquire the territory under the object when it landed. One cannot sell what one does not own. Since U.S.S.R./Russia did not have a property right to the territory under the landed object, there was nothing to sell."

Regardless of whose legal opinion prevails, Garriott now holds a new hope: That one day he'll get to see his lunar rover in person. "If you would have asked me [about going to the moon] in 1993 when I acquired Lunokhod 2 I would have said [the odds are] pretty close to zero. It's still a very low probability... But the probability is dramatically higher than it was," Garriott said. But the new "private space race" has changed all that. "As long as I keep myself healthy," Garriott said, "there's reasonable odds I can get a chance to go visit it. It has gone from zero probability to just a long shot."

Read the balance of this fanciful opinion piece, HERE. 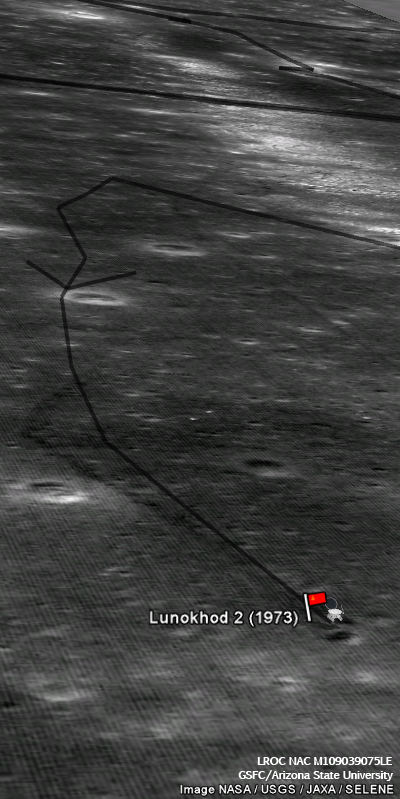