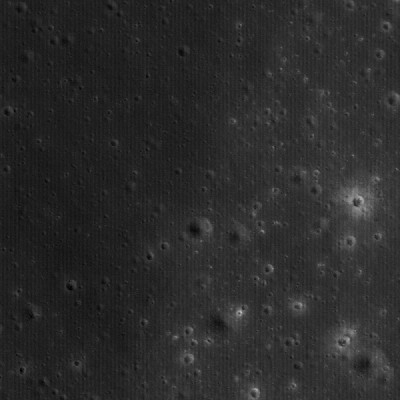 NAC Frame M111945148R. Part of the vast pyroclastic deposit near a Constellation Program Region of Interest located on the Aristarchus plateau is visible in this image. View is 537 m across [NASA/GSFC/Arizona State University].
Constellation Areas of Interest -
Aristarchus (2)
Lisa Gaddis
LROC News System
A typical view of the lunar surface? Hardly! This NAC frame (537 m across) reveals a dark, fine-grained pyroclastic deposit that has mantled older units, including flat mare deposits (at left) and nearby knobs of highland materials (at right). This site (Aristarchus 2) is located in the northwest region of the Aristarchus Plateau, within the most extensive deposit of pyroclastic materials on the Moon. The Constellation objectives here (Aristarchus 2) are more focused on resource potential, whereas Aristarchus 1 was selected more on the basis of geologic diversity.

At Aristarchus 2, some areas of the mantling deposit are estimated to be 10 to 20 meters in thickness. In the small area shown in the above image, the deposit is much thinner (likely only a meter or two deep). The bright-rayed crater at right-center (15 m diameter) has penetrated the mantle and exposed fresh, light-colored rocks typical of the lunar highlands. Many of the craters at left, although similar in size to the bright-rayed crater, have uncovered only dark materials that are slightly lighter in color than the pyroclastic mantle. Such exposures of rock by fresh craters provide some of the best clues to the composition and distribution of covered units and help to reconstruct the history of events that created the deposits we see.

Lunar pyroclastic deposits are formed by explosive eruption of basaltic magma and are thought to be associated with early stages of eruption of the mare deposits that fill impact basins across the near side. The deposits appear fine-grained and often very dark, and they have been called "mantling deposits" because they drape over and obscure underlying terrain. This mantling effect is similar to what you see after a deep snow: normally sharp edges of tables, chairs, and cars are now smoothed and subdued. The same effect happens under a blanket of fine ash.

Pyroclastic mantling deposits were sampled by the Apollo astronauts at several sites on the Moon, and in particular a deposit of submillimeter-sized orange glass and crystallized beads was discovered near Shorty Crater by Astronaut Harrison "Jack" Schmitt in the Taurus-Littrow Valley during the Apollo 17 mission. The beads at Apollo 17 formed from magma that originated ~400 km deep within the Moon and erupted more than 3.6 billion years ago.

Pyroclastic deposits are fascinating to lunar scientists because of the possible economic and engineering value of the volatile and metallic elements identified on and within their component beads. The beads have trapped solar wind hydrogen and Helium-3, and enrichments of volatile elements such as sulfur, lead, fluorine and zinc have been measured on their surfaces. Pyroclastic deposits are typically rich in iron oxides and also have widely varying amounts of titanium oxide, commonly present as the mineral ilmenite. Areas with pyroclastic deposits are likely to feature prominently among future exploration sites on the Moon and are a key enabler for large-scale human lunar habitation. Thus, it is important that we learn as much as we can about them. Where are they, how thick are they, and do compositions vary within a deposit and from deposit to deposit?

Explore the rich resources of the Aristarchus plateau for yourself!
Posted by Joel Raupe at 3:42 PM