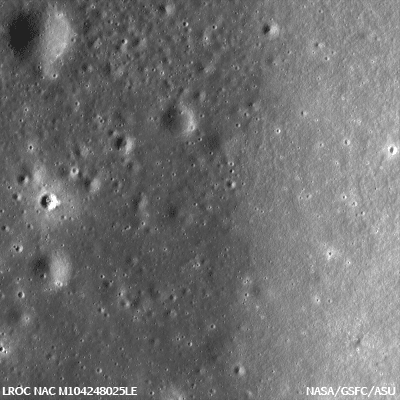 A contact between the dark basalt (left) of Mare Nectaris and the lighter anorthosite highlands (right) of Montes Pyrenaeus runs through the Constellation Program region of interest on the western rim of the Nectaris impact basin. Image width is 2.5 km, raw image resolution is 1m/pixel, NAC frame M104248025LE - click on image to enlarge this subset sample [NASA/GSFC/Arizona State University].

The Montes Pyrenaeus (15.6°S 41.2°E) mountain range borders the eastern edge of Mare Nectaris, on the rim of the Nectaris basin (330km diameter), which formed by the impact of an asteroid or comet about 3.9 billion years ago. This basin is easily visible in the lower right corner (western limb) of the Moon's disk as seen from Earth (Figure 1). 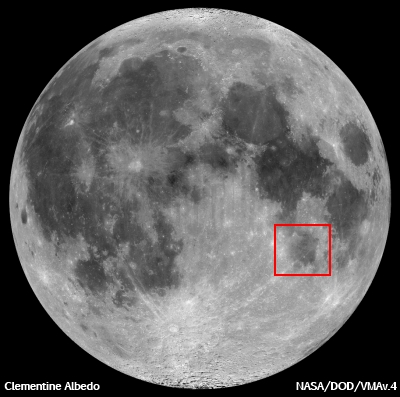 Figure 1: Mare Nectaris is boxed in red; a close up of this boxed area can be seen in Figure 2.

During the Nectaris basin-forming impact, the lunar crust uplifted and overturned to create the highland mountains of Montes Pyrenaeus; the remaining lunar crust beneath the basin was fractured to great depths. Much later, basaltic magmas rose to the surface through these fractures and erupted, covering the basin floor to form the dark basaltic plains of Mare Nectaris that we see today. 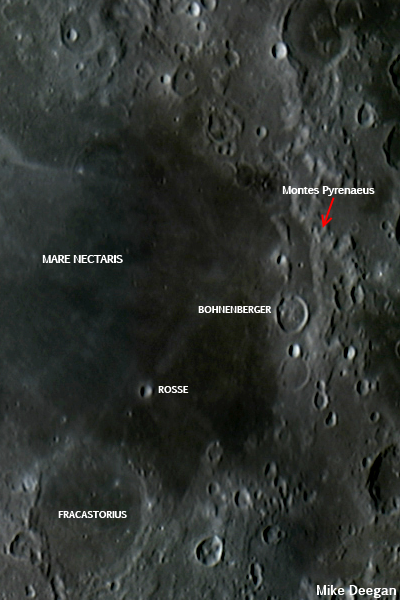 Figure 2. The Nectaris impact basin on the lunar near-side. The basin is 330 km across and filled with dark mare material. Montes Pyrenaeus is the light material to the right of the basin. The arrow locates the region featured in Figure 3 [From Moon Mosaic 80 Light by Mike Deegan].

This region in the Montes Pyrenaeus is one of the fifty NASA Constellation Program Regions of Interest targeted by LROC to provide data that supports future human and robotic exploration of the Moon. Since Montes Pyrenaeus and the mare deposits within the Nectaris basin are both very old, the contact between these two terrains is no longer sharp, but can still be distinguished through albedo contrast (Figure 3). 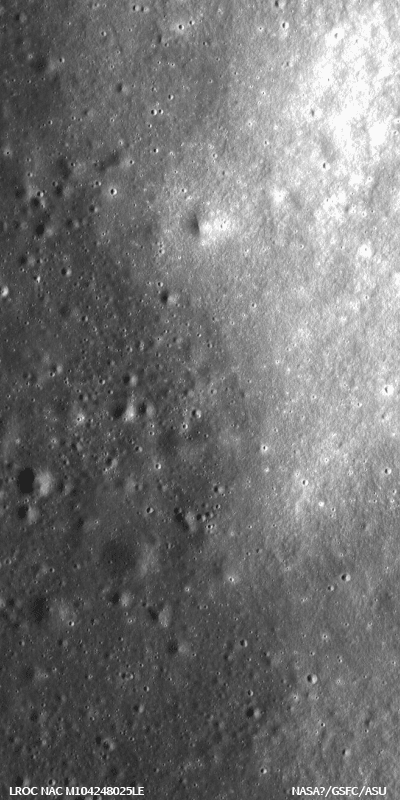 Figure 3. The contact between the dark basalt of Mare Nectaris and the lighter highlands of Montes Pyrenaeus, highlighted with red arrows. Image width is 2.5km, part of NAC frame M104248025L [NASA/GSFC/Arizona State University].

Older surfaces on the Moon were hit more frequently by comets and asteroids and thus should have more impact craters on them. However, there are a large number of small impact craters on the young mare material compared to the older highland material (Figure 3). This discrepancy is the result of heavily fractured anorthosite regolith of the highlands, which is weaker and steeper than the younger basaltic mare. These two factors make it easier to erode and erase small craters during moonquakes and shaking from nearby meteorite impacts. So here is a case where fewer impact craters indicate an older age!

Human explorers at this site would gain key geologic insights about the timing and formation of the Nectaris basin, sample Nectaris mare basalts, and access resources that lie hidden in the mare regolith.

Explore the Nectaris Constellation Region of Interest.
Posted by Joel Raupe at 11:34 PM