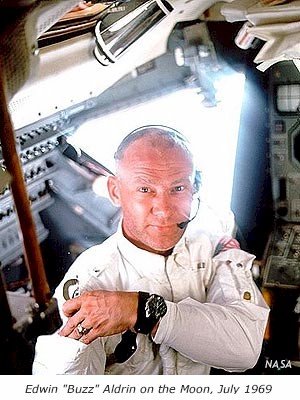 On July 20, 1969, Buzz Aldrin became the second man to set foot on the Moon, following mission commander Neil Armstrong. That historic moment was over 40 years ago. Today, Aldrin is celebrating another milestone, his 80th birthday.

Although the famous Apollo 11 mission was over four decades ago when NASA was in its infancy, Buzz continues to be very vocal in matters of human spaceflight. He is an outspoken critic of spaceflight policy and an expert in communicating all things space to the public.

INTERVIEW: Find out what Buzz had to say to Discovery News correspondent Irene Klotz during the Apollo 11 anniversary in July 2009.

Read the Interview HERE.
Posted by Joel Raupe at 1:47 AM

Great information. Happy birthday to Buzz Aldrin. They are god's gift to set their foot on the moon.