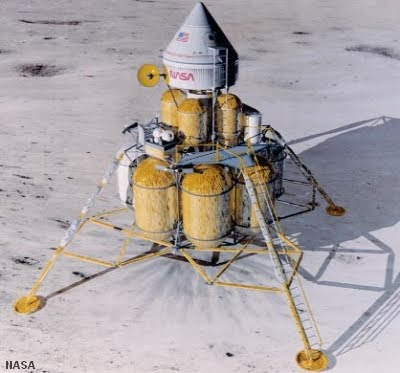 Beyond Apollo - Noted recorder of NASA's notions of yesterday, David S.F. Portree offers a no-nonsense post covering the 1992 lunar outpost plans that crashed upon the shoals of the first Augustine commission, and ultimately Congress.
David S. F. Portree
Beyond Shuttle

For their analysis, JSC and McDonnell targeted the first FLO expedition to Mare Smythii, a dark basaltic plain on the moon's eastern limb. They assumed that NASA would develop a heavy-lift rocket capable of launching 200 metric tons to 185-kilometer low-Earth orbit and 27 metric tons to the lunar surface. The monster launcher would permit the two FLO landers to be launched with their respective Trans-Lunar Injection (TLI) stages attached, eliminating Earth-orbital rendezvous and docking and reliance on an Earth-orbiting space station from the FLO plan. In other words, this FLO iteration would use the Direct Ascent lunar mission mode considered - and rejected - for Apollo moon missions. The first FLO expedition would leave Earth five years after program initiation; JSC and McDonnell judged this to be "not only feasible and attractive, but essential in gaining budget acceptance."

Read the full posting HERE.
Posted by Joel Raupe at 1:35 AM