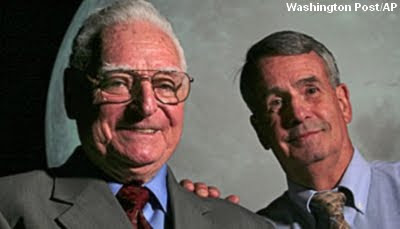 From left, Stanley Lebar and Richard Nafzger, two engineers and former NASA employees, who were involved in the taping of the Apollo 11 moon landing, at Goddard Space Flight Center in Greenbelt (Associated Press)

On July 20, 1969, when Neil Armstrong opened the hatch of the Apollo 11 lunar module and stepped onto the surface of the moon, a small camera captured the moment and sent pictures back to Earth, 239,000 miles away. At least 500 million people witnessed the long-unattainable milestone on television, as gray, halting images showed Armstrong and fellow astronaut Edwin "Buzz" Aldrin walking on the moon and planting the American flag.

Armstrong memorably described the accomplishment as "one small step for man, one giant leap for mankind."

No one who heard those words was happier than Stanley Lebar. An engineer at a Westinghouse plant outside Baltimore, Mr. Lebar (pronounced luh-BAR) spent five years managing a NASA project to build the camera that went to the moon.

He and his team of 75 engineers used the emerging technology of microelectronics to make a mobile, compact camera that weighed only 7 pounds. Most TV cameras at the time weighed 700 pounds. The new camera had to survive the rigors of liftoff and space travel, it had to work in low light and it had to function in temperatures as high as 300 degrees Fahrenheit and as low as minus-250. Most important, it had to transmit clear black-and-white images that could be shown on television.

After solving these puzzles, Mr. Lebar faced another obstacle: He had to overcome the skepticism of some NASA officials, who considered his camera excess baggage and of no scientific value.

Read the full Obituary HERE.
Posted by Joel Raupe at 1:17 AM