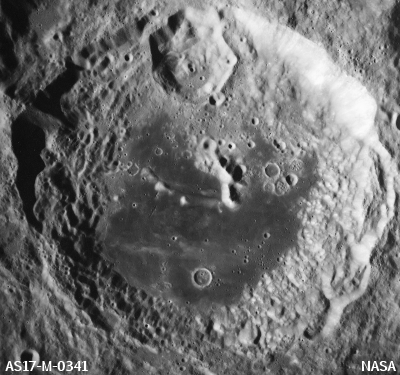 North of the equator on the Moon's Far Side, Aitken stands out as a landmark, the furthest border of 4 billion year old South Pole-Aitken (SPA) Basin, 2500 kilometers from its nearest rim spilling 200 kilometers over onto the Near Side past the Moon's south pole [NASA/Apollo 17/ASU-Apollo Image Archive]. 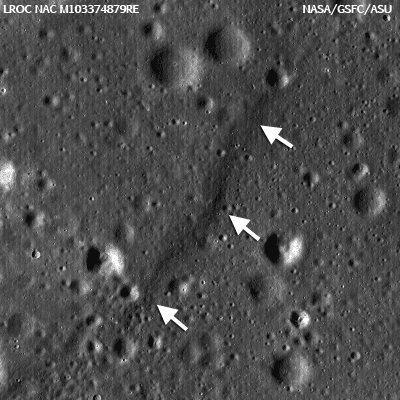 Mare basalt-filled craters (basins) are few in number and small in size on the farside. Aitken crater is about 135 km-in-diameter and is located on the northern rim of the South Pole-Aitken basin, the largest preserved basin on the Moon. The crater has a central peak and much of its original floor has been buried by younger mare basalt. Enigmatic albedo features called swirls are found on the floor of Aitken. Scientists are not sure how these features formed, but think they may be related to weak variations in lunar magnetism. Hummocky floored craters, impact craters formed in Aitken's mare basalt infill, have strange, bulbous hills. Their origin is also not well understood. These are some of the reasons why a Constellation Program region of interest is located within Aitken crater. The wealth of unusual features in Aitken make it an exciting location for exploration by astronauts. 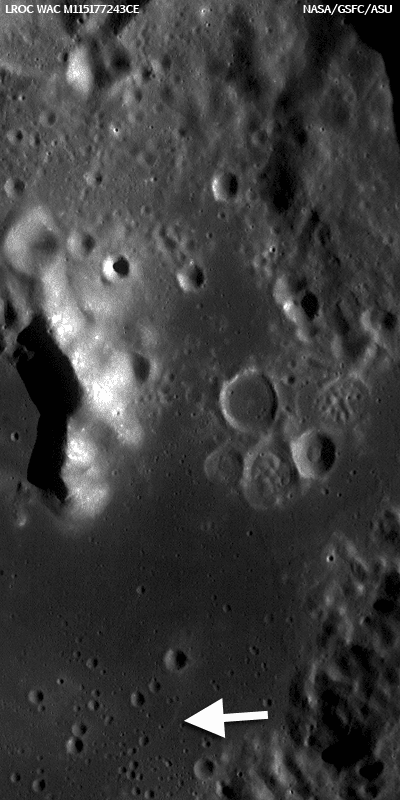 Basalts, swirls, and hummocky floored craters all populate the floor of Aitken crater. Mare basalts lapped up against the south half of the central peak (center of image), burying much of the original floor. The swirls can be seen just west of the central peak as bright and dark mottling, their origin remains a mystery. Arrow indicates location of today's featured image; LROC WAC mosaic, image width ~36 km [NASA/GSFC/Arizona State University].

The Moon, like Earth and the other terrestrial planets and many of the other solid bodies in the Solar System, exhibits tectonic landforms. Tectonic landforms result from forces that have either contracted and pushed crustal material together, or extended and pulled crustal material apart. Most of the tectonic landforms on the Moon are found in and around the nearside mare basins. Two contractional tectonic features, wrinkle ridges and lobate scarps, are found in mare basalts, volcanic rock that flooded the floors of the nearside impact basins after their formation. The forces that created these landforms in the mare basins are thought to be from the weight of the dense basalts that caused them to subside and contract.

Like the mare basalts in nearside basins, those in Aitken have been deformed resulting in wrinkle ridges similar in form to those on the nearside, although much smaller in scale. Near the southeastern rim of Aitken, close to the contact between the mare basalts and hummocky crater rim material, is a linear, low-relief scarp. This scarp, about 3 km in length, is very similar in size and morphology to lobate scarps found elsewhere on the Moon. Lobate scarps are relatively young landforms thought to be the surface expression of thrust faults, formed when an upper fault block is pushed up and over a lower fault block.

Outside of a mare basin, what is the origin of the tectonic forces that formed this lobate scarp? The thickness of the mare basalts in Aitken crater is small compared to the thickness in the much larger nearside basins. Is there enough mare basalt to cause subsidence and contraction? The contraction that formed the lobate scarp in Aitken crater may be from a much broader and deeper source. Lobate scarps are the most common tectonic landforms in the lunar farside highlands. The forces that formed these thrust fault scarps may come from slow cooling of the lunar interior that led to global contraction. Thus, the lobate scarp in the mare basalts of Aitken is likely due to thermal contraction of the Moon.

Astronauts exploring and sampling the farside mare basalts in Aitken crater would surely plan a trip to this lobate scarp. Examination of the base of the scarp might reveal a subtle break and offset of the basalt regolith or soil that could be evidence of the underlying thrust fault, providing important insight into when the lobate scarp formed.

Explore the Aitken crater Constellation region of interest for yourself and look at previously released images showing another lobate scarp and several wrinkle ridges.
Posted by Joel Raupe at 10:25 PM

Your blog is so excellent. I am your regular reader of your blog.

Hey i am interesting in adding your http://lunarnetworks.blogspot.com/
in my blog
http://spacestation-shuttle.blogspot.com/

I am honored to add it to my blog in right side bar links.

Will you add my blog in your blog list

Thanks for visiting my blog as well!

I really enjoyed reading your blog. The posts of space and space shuttles are really inspiring and informative.Thanks for sharing.
regards
geospatial services Geospatial mapping

I too enjoyed reading your blog. I was very much impressed on your blog quality and interesting contents. In fact i bookmarked your blog and send to my network friends.

I follow your blog and i am very much thankful to add your blog in my space blog.

I could also see "Off-World News CLOUD" links. Will you include my blog also in your link.

I will be very much happy to see my blog in your great and classical blog like yours.

Please also add in your blog