Does this coelis, south of Proclus, really exist? Or is it more likely an error in the Digital Elevation Model? A casual census of available LRO Narrow-Angle Camera adds evidence to both arguments for and against such features elsewhere, though not yet this particular 800 meters tall and 1200 meter wide, at the base, formation which seems to be just barely within the resolution of the Apollo 15 high-sun metric camera photography. Whether this particular anomalous feature really exists or not, before 2010 is over it is likely many such features will be discovered that were beyond earlier orbital surveys.

The Lunar Reconnaissance Orbiter Camera (LROC) team at Arizona State University is owed a huge debt of gratitude for going above and beyond, literally, in sharing at least some of what has been discovered in unprecidented detail on the Moon by the LRO's narrow-angle camera (NAC).

LROC principal investigator Mark Robinson deserves some sort of Webby Award for sharing subsets of commission-phase LRO NAC imagery, particularly of the poles and eastern far side, hemisphere through the planetary data system. This test release has lunatics like us anxiously anticipating the Lunar and Planetary Conference in early March and the scheduled larger release of LRO data later that month.

It's hoped by that time the interested public and lunar science community will then be able to get a very long anticipated closer look at certain features on the Moon that have always been tantalizingly beyond the best resolutions.

Recently the LROC News System at Arizona State has begun sharing more of the Wide-Angle Camera (WAC) images, after redesigning their website, and this past week the team released something unexpected.

It appears the Laser Altimeter detail that will also soon be available from LRO will be complimented greatly by additional digital terrain modeling made possible by the LROC WAC. It's stunning, certainly, but still just hints at how our understanding of the Moon should soon match the true state of the art. 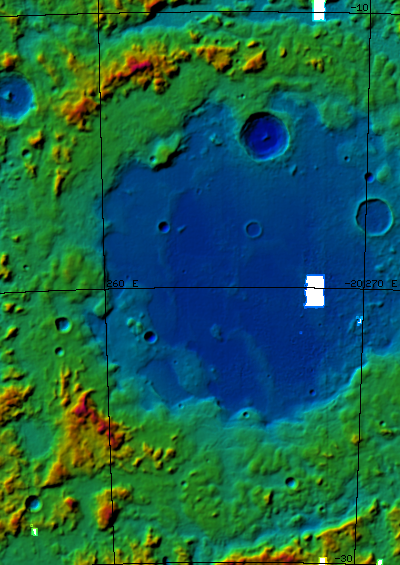 How was the Terrain Model created?

Image overlap amounts to approximately 50% near the equator. Using sophisticated so-called "photogrammetric" techniques and computer software, a terrain model can be computed. Several hundred WAC images were combined to form this model. It is a subset of an almost global model, which is currently under construction and which will consist of more than 10,000 WAC images. This particular terrain model was produced using a software system that was originally developed by the German Aerospace Center (DLR; English version) for the High Resolution Stereo Camera (HRSC) on the European Mars Express Mission.

Read the rest of the release HERE.
Posted by Joel Raupe at 3:06 PM

hi,
very nice informations
thanks for your sharing keep blogging