To a Rocky Moon: A Geologist's History of Lunar Exploration 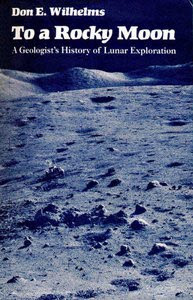 Don Wilhelms was a member of the Apollo Scientific Team and the US Geological Survey. In this book he describes his role, along with his geologist colleagues, during the Apollo explorations of the Moon. In addition, he presents a brief history of the theories associated with the origin of the moon and its craters, the people and problems involved in the section of the Apollo landing sites, a discussion of the geological results obtained from each of the Apollo landing sites, and finally a summary of the findings from the Apollo missions and the development of a theory to explain the formation of the moon.
(Ed. Note: The entirety of Dr. Wilhelms' landmark book in Adobe Reader format is presently available from multiple on-shore and off-shore commercial servers, HERE. Though there is no cost aside from the bandwidth and time needed to download a 180 megabyte "zipped" .rar archive file, this notice is not an endorsement for what may or may not be a proprietary or copywrite violation. It can, however, be considered as strong an endorsement of Dr. Wilhelms' important work and this book, in particular. The time is long overdue that this work from 1992 be made available to a younger audience and in a modern form.)
Posted by Joel Raupe at 4:00 PM