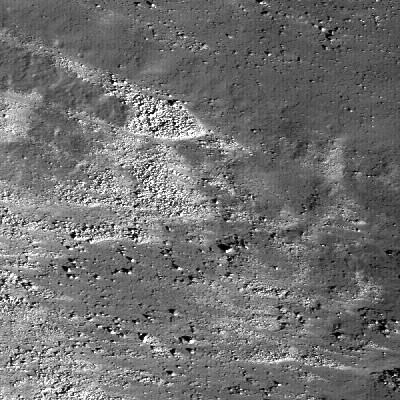 Eastern slope (right to left is downhill) of the Vallis Schröteri, "Cobra Head". This feature is located in the western portion of a Constellation Program region of interest on the Aristarchus plateau. The slopes of the Cobra Head are boulder-rich and display albedo variations - bright to dark. The patterns of debris and flows on the slopes are evidence for mass-wasting and landslides that expose a variety of rocks. Image width is 3.7 km, pixel width is 0.51 meters, from NAC frame M111918050R [NASA/GSFC/Arizona State University].

The Aristarchus plateau has fascinated lunar observers since before the space age. Its odd shape and low and high albedo extremes immediately draw your attention. Superimposed on the plateau is a spectacular channel (or rille), and the very young Aristarchus crater (regional overview). Aristarchus crater is the largest impact crater on the plateau and is one of the highest reflectance (in fact, it is blindingly bright in a telescope) features on the Moon. The plateau itself is surrounded by the lava flows of Oceanus Procellarum, and the whole region has a high concentration of sinuous rilles.

The largest of these is Vallis Schröteri, which is also the largest sinuous rille on the Moon. Finally, the plateau is almost completely covered by one of the largest lunar regional pyroclastic deposits. Large pyroclastic deposits are a potential resource for useful elements like hydrogen, oxygen, iron and titanium. Thus, due to its geologic complexity and resource potential, the Aristarchus region is naturally of interest to the Constellation Program and future lunar missions.

The head of Vallis Schröteri, a feature also known as the "Cobra Head", consists of a deep pit, which is of great interest to scientists. The Cobra Head is thought to be the source vent of a tremendous outflowing of lava that flowed across the plateau and formed the rille. Exposed in this vent are lava flows, pyroclastic material, and small bits of white rocks. The white rocks are pieces of the underlying crust most likely composed of anorthositic (highland) rocks. Much of this material was excavated by the impact that formed Aristarchus Crater and was brought to the surface from great depths.

These white rocks may be of a unique crustal composition representing late-stage subterranean magmatic activity. Rocks that form last from a magma body often have rare compositions enriched in incompatible elements. The elements are labeled incompatible because they do not easily combine with other elements and thus concentrate in the last remaining melt. Therefore, the last rocks to freeze out of a magma have high levels of these incompatible elements. Sampling such rocks will provide insights into lunar magmatic evolution and the bulk composition of the mantle. 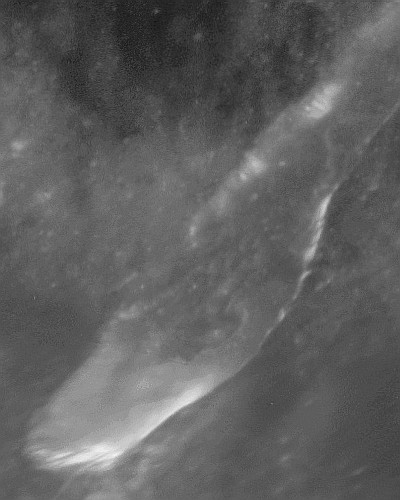 The Cobra Head of Aristarchus Plateau in full sunlight as seen by Hubble- part of a larger examination of the links between lunar albedo and the geologic composition of the Moon's surface completed from Earth orbit using the Hubble Space Telescope. One of the many reasons Aristarchus is the most reported location of transitory phenomena is the blinding reflection from relatively fresh materials uncovered by the impact that created nearby Aristarchis crater, by far the brightest part of the larger, rectangular Aristarchus formation [NASA, ESA and J. Garvin (NASA/GSFC)] 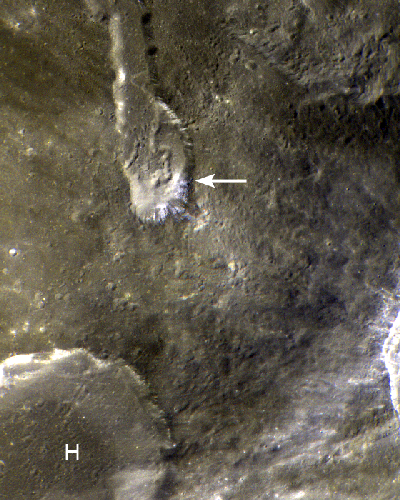 LROC Wide-Angle Camera (WAC) mosaic centered on the Aristarchus Plateau; the Cobra Head is indicated with white arrow, a small portion of the rim of Aristarchus crater is just visible on the lower right, "H" indicates center of Herodotus crater (35 km diameter). M111918011CE, 605 nm in red, 567 nm in green, 415 nm in blue, image width ~55 km, north is up.

NAC image M111918050R, centered at 24.82N, -49.12E, shows a portion of the eastern wall of the Cobra Head. These slopes are covered with boulders and debris that slid down the walls. The patterns on the slopes are evidence for downslope movement (landslides and/or creep). "Flow" is from right to left, with boulders accumulating in local "bars" such as the one in the center of the image. The slope is scoured by the movement of boulders. The rocks exposed in the rille exhibit large brightness contrasts, some being very dark
and others very bright.

What is the origin of the bright material? Some of the brightness is a function of steep boulder faces oriented towards the Sun. Even dark rocks such as basalt can exhibit bright Sun-facing facets. Most of the local material here is basaltic, having originated in the huge Cobra Head vent at the head of the 140-km long Vallis Schröteri. To the east (right) of this image is the Aristarchus Crater, which has some of the brightest ejecta of any crater on the Moon. Some of that bright ejecta material is among the boulders that have moved down this slope as the steep rim gradually collapsed over time.

Explore the Aristarchus (1) Constellation Program region of interest for yourself, and imagine what it would be like to look out over Vallis Schröteri, the Lunar Grand Canyon.
Posted by Joel Raupe at 11:59 AM