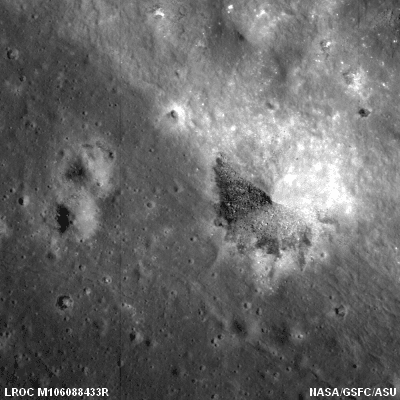 A Constellation Program Region of Interest near the northeast edge of the unusually large melt pond adjacent to the lunar far side crater King. The boundary between the dark, coherent impact melt rock at the lower left of the image and the bright, pulverized ejecta blanket to the upper right is clearly visible in the floor of a smaller crater that formed at the boundary between these two units. Image width is 1.3 km, pixel width is 1.29 m. Subset of NAC frame M106088433R [NASA/GSFC/Arizona State University].

The lunar far side crater King is about 77 km in diameter and 5 km deep. King Crater is one of the youngest craters on the far side. It is an excellent example of a Copernican-aged complex impact crater. Simple impact craters are bowl shaped, whereas complex craters have central peaks, and sometimes even concentric rings. King is known particularly for its remarkable claw-shaped central peak and an unusually large ~20 km diameter, ca. 225 km3 melt pond. The melt pond, which lies to the northwest of King, has a relatively flat, smooth surface that is a potentially safe landing site for both robotic and human lunar exploration. (see the Apollo 16 Metric camera image taken in 1972 below, or browse this image in the ASU Apollo Digital Image Archive.) Scientific questions that can be answered by sending astronauts to explore this site include: How old is King Crater? What is the origin of the melt pond? What is the nature of the regolith in the lunar highlands? 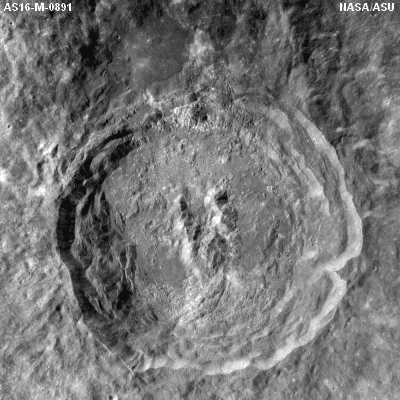 Questions about the origin of the melt pond were raised in the 1970's, after King was photographed by Apollo 16. Is the melt pond composed of impact-related melt? Or does it have a volcanic origin? A volcanic origin is supported by the large size of the melt pond, and the fact that there are few small impact melt ponds evenly distributed around the entire crater. However, there is no apparent volcanic source for the melt, rather the melt drapes the surrounding area and exhibits flow features that indicate that it flowed into and accumulated in the topographic low of an old crater. One possible explanation as to why there is little impact melt distributed around the entire crater, which could also explain the unusual central peak complex, is that King Crater may have been formed by an oblique impact. During an oblique impact, impact melt would be preferentially deposited along the direction of the incoming projectile, not evenly around the margin of the crater. Samples of the melt pond and surrounding impact debris, collected either robotically or by humans, can answer the questions about the melt pond's origin. In addition, new information about impact craters on the Moon helps us understand how terrestrial impact craters form on the Earth, where erosion and other geological processes often destroy valuable scientific evidence.

NAC image M106088433R, centered at 6.91° N, 119.93° E, extends from the northern rim of King, across the large melt pond, and into the ejecta blanket of King. The image was taken at a solar illumination angle of 35 degrees, which means that the Sun was relatively high in the sky. Such imaging conditions are useful for seeing subtle color differences between different areas within the image. For example, the impact melt pond is darker in color than the ejecta blanket. The brightest spots in the image are boulders of anorthositic (highlands) material that lie on top of the ejecta blanket. Such albedo differences also offer clues to how long materials have been exposed to the solar wind, cosmic radiation, and micrometeorite impacts, processes collectively called space weathering. 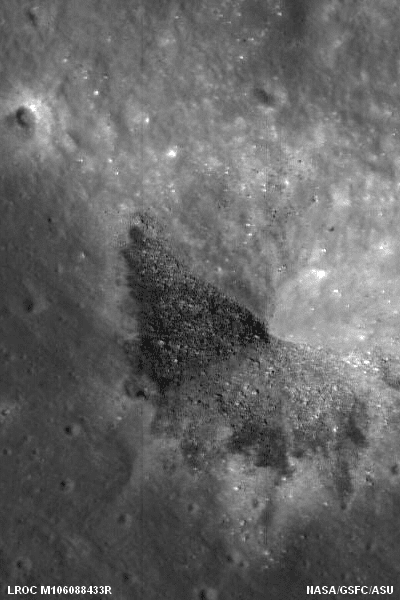