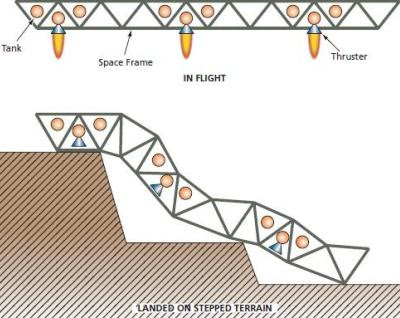 A Spacecraft-like System looking like a truss equipped with thrusters would land on and conform to an irregular terrain surface.

The space-frame lunar lander is a conceptual spacecraft or spacecraftlike system based largely on the same principles as those of the amorphous rover and the space-frame antenna described in the two immediately preceding articles. The space-frame lunar lander was originally intended to (1) land on rough lunar terrain, (2) deform itself to conform to the terrain so as to be able to remain there in a stable position and orientation, and (3) if required, further deform itself to perform various functions.

In principle, the space-frame lunar lander could be used in the same way on Earth, as might be required, for example, to place meteorological sensors or a radio-communication relay station on an otherwise inaccessible mountain peak.

This work was done by Steven A. Curtis of Goddard Space Flight Center. For further information, contact the Goddard Innovative Partnerships Office at (301) 286-5810. GSC-14848-1
Posted by Joel Raupe at 7:16 PM