Saga of the Bonestell 'Lunar Landscape' 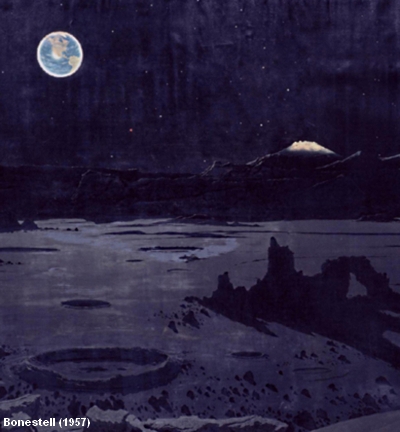 Just a small sampling from the middle of "Lunar Landscape" by Chesley Bonestell (1957) and representing a notion from the dawn of the Space Age of the view of Earth from a New Moon's near side northern hemisphere and also how much has been learned of the Moon since that time. Micrometeorite bombardment, for example, "gardens" the immediate surface of the Moon every two million years, causing an erosion unseen on Earth and smoothing most of lunar mountains. Earth is not far from what was seen by Apollo astronauts or Kaguya as recently as 2008, though the great systems of clouds are not seen, nor is the angle of North America properly portrayed. The full mural can be seen here, showing why the mural's unique place across more than just one discipline makes it more than worthy of preservation.
Tom D. Crouch
Smithsonian Air & Space Blog

For more than a decade it has been my privilege, among my other duties, to serve as curator of the National Air and Space Museum art collection. It comes as a surprise to many folks to realize that the Museum has an art collection. In fact, it includes over 4,700 works by artists with names like Daumier, Goya, Rauschenberg, Rockwell and Wyeth, and is perhaps the finest and best-rounded collection of aerospace-themed art held by any of the world’s museums. People who are aware that I manage the Museum’s art treasures occasionally ask if I have a favorite work in the collection, I do.

Chesley Bonestell’s mural, Lunar Landscape, was unveiled at the Boston Science Museum’s Haydon Planetarium on March 28, 1957. “No spaceship reservations are needed for a startlingly realistic visit to the Moon” announced a museum press release. Measuring forty feet long by ten feet tall, the dramatic panorama of the lunar surface was the masterwork of an artist who had done more than his fair share to set the stage for the coming of the Space Age.
Read the full post HERE.
Posted by Joel Raupe at 12:37 AM