Forty years after Apollo 13 at KSC 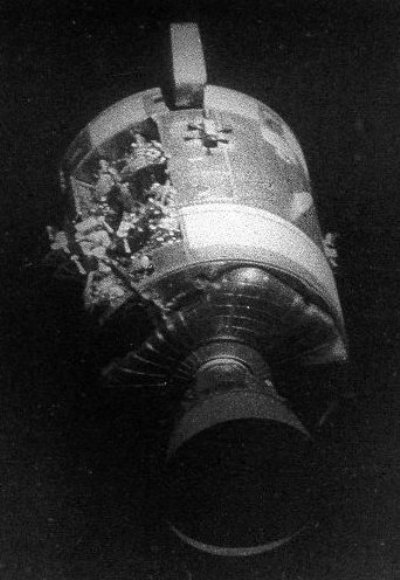 Having barely survived the aftermath of the tank explosion resulting in the only aborted manned lunar landing, after swinging around the Moon and using their lunar module's descent rocket to accelerate their lifeboat configuration into a proper return trajectory, before encountering Earth's atmosphere at 40,000 kilometers per hour, the crew first undocked from the LM and then jettisoned the Service Module. Only then were they able to see how close their ordeal came to ending at the very start. The explosion had ripped away entire panels on the SM and warped the fragile superstructure. As they re-entered Earth's atmosphere it still remained to be seen whether the Command Module's heat-shield had been damaged. Though the scene above was described by the exhausted crew to anxious Houston, nearly a week passed after the crew of Apollo 13 was safe on the ground before the above picture was available to the world [NASA/Apollo 13].
Jason Rhian
Examiner
It was called NASA’s “successful failure” and it marked one of the most trying points in the space agency’s history. Apollo 13 tested the resolve of NASA’s young engineers and astronauts as never before the heroic efforts of these space pioneers would go down to write NASA’s finest hour. Now, on the fortieth anniversary of the near-loss of the Apollo 13 crew, the Astronaut Scholarship Foundation is celebrating the safe return of the crew at Kennedy Space Center in Florida.
The Apollo 13 saga began with the liftoff of the mighty Saturn V rocket at 13:13 p.m. (EDT) on April 11, 1970. Two days after launch, a command was given to stir the oxygen tanks and what followed was one of the most dramatic moments in manned spaceflight history. An explosion occurred and the crew and mission managers on the ground had to scramble to ensure the safe return of the crew. Through seat-of-the-pants flying and ingenious technical innovations, the crew was brought home safe and sound. To show how great an impact this mission had, to date it is the only Apollo mission to have a big-budget Hollywood movie made about it.
Not even Apollo 11 can make that claim.
Read the article HERE.
Posted by Joel Raupe at 12:15 AM