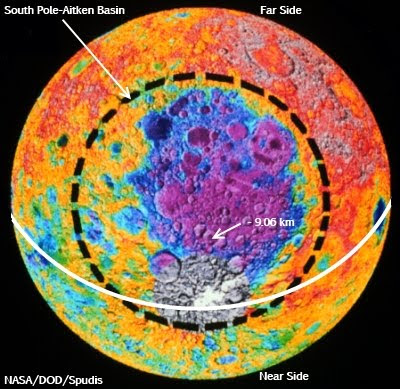 Scientists on Earth know least of the oldest-known, largest-known and deepest impact basin on the Moon, South Pole-Aitken (SPA) Basin, stretching from it's mountainous rim between Earth and the lunar south pole on the Near Side nearly to the equator on the southern Far Side. Among the three New Horizon missions making the final cut in an announcement by NASA before the New Year is MoonRise, the first U.S. robotic lunar sample return scenario, under the direction of Washington University in St. Louis.
Nearly 40 years after the Apollo astronauts first brought samples of the Moon to Earth for study, researchers from Washington University in St. Louis are leading an effort to return to the Moon for samples that could unlock secrets of the early Solar System.

Known as MoonRise, the proposed Moon mission is one of three finalists now bidding to become NASA's next big space science venture, a $650 million mission that would launch before 2019.

The MoonRise lander, unmanned and robotically controlled, would scoop up about two pounds of pea-sized lunar rocks and return them to Earth for further analysis.

"The samples would provide new insight into the early history of the Earth-Moon system," said Bradley Jolliff, Ph.D., principal investigator for the proposed mission and research professor of Earth and Planetary Sciences in Arts & Sciences at Washington University.

The MoonRise mission targets the giant South Pole-Aitken (SPA) Basin, which spans from edge to edge nearly 2500 km, so named because it lies between the Moon's South Pole and Aitken Crater, just south of the Moon's equator. The SPA Basin ranks among the largest recognized impact structures in the Solar System.

Samples from the crater could answer questions about the bombardment history of the Earth-Moon system during the first 600 million years of Solar System history, at a time when life was first gaining a foothold on Earth.

"Determining the age of rocks formed during the impact event will allow scientists to test hypotheses for the cause and source of such giant impactors during the planets' formative years," Jolliff said. "The samples would also illuminate processes by which the crusts of planets form and by which giant impacts alter them.

NASA announced Dec. 29 that MoonRise would be one of three space exploration proposals considered for selection as the third venture in its ongoing New Frontiers space science program. New Horizons, the program's first mission, is expected to reach the Pluto-Charon system by 2014. The Juno mission, slated for launch in 2011, will explore Jupiter from pole to pole.

WUSTL's MoonRise mission is competing with a proposal from the University of Arizona at Tucson that would retrieve a sample from a near-Earth asteroid and another proposal led by the University of Colorado at Boulder to probe the atmosphere and crust of Venus.

"These are projects that inspire and excite young scientists, engineers and the public," said Ed Weiler, associate administrator for the Science Mission Directorate at NASA Headquarters in Washington. "These three proposals provide the best science value among eight submitted to NASA this year."

Each of the three proposal teams will receive about $3.3 million from NASA in 2010 to conduct comprehensive, 12-month studies documenting details of concept implementation underlying their proposed missions.

In 2011, after detailed mission implementation, feasibility, cost, management and technical plans are completed and reviewed, NASA will select one proposal for full development and launch. Mission cost, excluding the launch vehicle, is limited to $650 million.

Washington University's Department of Earth and Planetary Sciences has a rich history of involvement in NASA space missions and in the study of lunar samples — Apollo and lunar meteorites .

Scientists are eager to explore the South Pole-Aitken region because it is thought to harbor rocks and melted material from deep in the Moon's crust, which are poorly represented in lunar samples retrieved by the Apollo missions. The last batch of Apollo Moon rocks arrived on Earth in 1972.

The MoonRise mission's scientific value is greatly magnified, said Jolliff, by the opportunity it poses to determine the ages of key impact events in Solar System history, a line of study now limited mostly to analysis of the Apollo lunar samples and meteorites found on Earth.

"What we have is a set of very testable hypotheses about the causes and effects of the pummeling by giant impactors that took place at a time when Earth's rock record holds very little information," Jolliff said. "This information is perhaps uniquely recorded in the ancient Moon rocks."

MoonRise also would make use of information gleaned from orbital spacecraft, including recent missions by European Space Agency's (SMART-1), the Chinese (Chang'e-1), the Indians (Chandrayaan-1), the Japanese (Kaguya), and the currently active US Lunar Reconnaissance Orbiter (LRO), to provide all of the information needed to select the best landing site.

MoonRise will be the first NASA mission to robotically return samples from another planetary body to Earth. Such a capability would be a precursor and a feed-forward demonstration for future sample return missions from Mars or other planetary bodies, according to Dr. Leon Alkalai, Manager of JPL's Lunar Robotics Exploration Program Office, and Capture Lead for the MoonRise proposal,

Jolliff is a co-investigator on the Lunar Reconnaissance Orbiter Camera system (LROC) that is currently imaging and investigating the Moon in ways that will enable the next generation of landers — human and robotic — to land safely anywhere on the Moon and to select the best sites for science.

The South Pole-Aitken Basin targeted by MoonRise is especially ripe for scientific exploration, according to lunar sample expert Korotev.

"This is the largest and oldest impact basin known on the moon," said Korotev. "The main goal of the mission is to determine how old it is."

Small rock fragments from an Apollo soil (left) and analysis of one such rock fragment in Korotev's gamma-ray detector lab in the WUSTL Department of Earth & Planetary Sciences.

NASA's New Frontiers program seeks to enhance understanding of the Solar System by sending frequent space exploration missions to celestial bodies deemed most likely to hold clues about such issues as the formation of the Planets and the origins of life.

For more information about the New Frontiers Program, visit: http://newfrontiers.nasa.gov
Posted by Joel Raupe at 8:05 PM