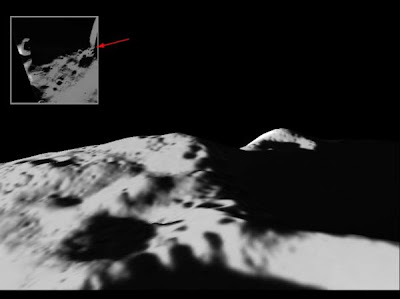 Images taken by the AMIE camera carried by ESA’s SMART-1 mission have been used to create digital elevation model of the peak, which is almost continuously exposed to sunlight.
“AMIE is not a stereo camera, so producing a 3-D model of the surface has been a challenge,” said ESA's Dr. Detlef Koschny.
“We’ve used a technique where we use the brightness of reflected light to determine the slope and, by comparing several images, put together a model that produces a shadow pattern that matches those observed by SMART-1.”
AMIE took a total of 113 images of the peak, located close to the rim of the Shackleton Crater which lies on the lunar south pole. In all but four of the images, the peak was illuminated by sunlight.
Read more HERE.
Posted by Joel Raupe at 11:37 PM