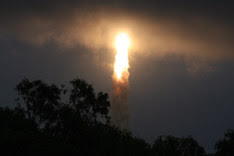 All systems nominal, as ISRO's PSLV-C-11, carrying India's first Lunar spacecraft is in an excellent Earth Orbit, in preparation for TLI. "A textbook mission," according to Sriharikota.
Chandrayaan 1, was launched this morning from Sriharikota north of Chennai.
The US returns to lunar exploration aboard Chandrayaan-1, which is carrying two NASA instruments in its payload.
Speaking minutes after the successful liftoff from the spaceport off the Andhra Pradesh coast, about 80 km north of Chennai, Chairman of the ISRO, G. Madhavan Nair described the moment as "historic."
"India has started its journey to the moon. The first leg has gone perfectly. the spacecraft has been launched into orbit."
The 44.4-metre-tall 316-metric tonne rocket, Polar Satellite Launch Vehicle (PSLV C11), had a textbook launch at 00.20 a.m., (UT), placing Chandrayaan-1 into its scheduled transfer orbit around Earth within 18 minutes, as planned.
Nair pointed out that the launch had gone off perfectly despite heavy rain in and around the spaceport for the last four days. "We've been fighting the odds for the last four days," he said. But the weather relented by Tuesday evening, and there no rain when the launch took place in a cloudy morning sky.
From its geostationary transfer orbit, Chandrayaan 1 will use its on board liquid apogee motor and a series of complex maneuvers will take it to lunar orbit - November 8.
India's mission to the moon is the world's 68th. Of them, 64 have been launched by the US and the former USSR.
China and Japan launched their respective Chang'e 1 and Kaguya (SELENE) in September and October 2007, while ESA launched the SMART technology test platform that orbited the Moon from November 2004 until September 2006.
Because of a launch window conflict, NASA delayed the beginning of the LRO/LCROSS missions until at least February.
Posted by Joel Raupe at 1:57 AM