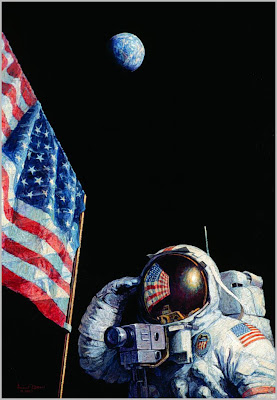 Alan Bean always had a creative streak: As a child, tinkering with his model airplanes until they became perfect little replicas of the real thing, and later, proposing aircraft paint designs during his military career.
After he became an astronaut, he took evening art classes as his pilot training allowed. But once he left NASA in 1981 after 18 years, Bean began his artistic career in earnest, mining his own memories to capture images of faraway worlds.
One of an elite dozen astronauts who have walked on the moon, Bean the artist found a new mission: To share his explorations through his paintings, capturing splendours of the moon that are difficult to express in words alone.
They're not like Earth paintings. They don't look like Earth paintings," Bean said. They're paintings from another world."
Bean's art is on display at the LBJ Library and Museum at the University of Texas and coincides with the museum's exhibit To the Moon: The American Space Program in the 1960s.
Bean, 76, was the lunar module pilot on Apollo 12 in November 1969 when he became the fourth person to step foot on the moon. The mission was man's second lunar landing, and scenes from that trip -- along with depictions of fellow astronauts' moon visits and occasional fantasy elements tossed in -- comprise Bean's collection of paintings.
He was training to become a space shuttle commander when he decided to leave NASA, where he helped set 11 world records in space and astronautics.
I said, 'You know, there's a lot of young men and women around here that can fly this shuttle as good as I can or better. Maybe if I left the space program, which I dearly loved, and painted some of my experiences that I could leave a legacy for future generations that somebody might care about,'" Bean said.
Read more from the AP HERE.
Posted by Joel Raupe at 1:57 AM