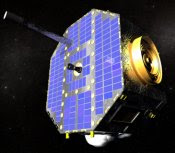 Off to map the Heliosphere

NASA’s Interstellar Boundary Explorer (IBEX) spacecraft has been launched via an Orbital Sciences Pegasus XL launch vehicle on Sunday, after it was released by its L-1011 carrier aircraft at around 1:44pm EDT.
From NASA Spaceflight.com: With all the interest surrounding SpaceX’s Falcon I launch vehicle of late, many forget that Pegasus was the world’s first privately developed space launch vehicle. Its maiden 1990 mission marked the first all-new, unmanned space launch vehicle developed in the US in more than 20 years.
Other landmarks included the Pegasus being the first winged vehicle to accelerate to eight times the speed of sound, and the first air-launched rocket to place satellites into orbit, using its carrier aircraft as an ‘air breathing reusable first stage.’
The three-stage Pegasus is used by commercial, government and international customers to deploy small satellites weighing up to 1,000 pounds into low-Earth orbit.
With the aerodynamic lift generated by its unique delta-shaped wing, Pegasus typically delivers satellites into orbit in a little over 10 minutes, which it has done 39 times before - making it the world’s leading small launch vehicle.
At T+78 seconds, the Orion 50S XL first stage motor burns out ahead of a ballistic coast period prior to shedding its wings and expended first stage. The Orion 50 XL second stage will then fire at T+93 seconds for the push to orbit, burning out at T+2 mins, 47 seconds.
Following a short coast phase, the Orion 38 third stage motor ignites at T+5 mins, 14 seconds for 68 seconds to deliver the IBEX spacecraft into a temporary 125-mile circular parking orbit.
IBEX is then “spun up” to 60 rpm at T+7 mins, 47 seconds, ahead of spacecraft separation at T+8 mins, 22 seconds, marking the 40th mission success for Pegasus.
Orbital’s L-1011 aircraft picked up the integrated Pegasus XL vehicle from Vandenberg Air Force Base in Californian last week, before the duo arrived at the Reagan Test Site at Kwajalein.
NASA’s IBEX satellite blasted off today to begin its mission to map the outer reaches of the solar system. The spacecraft was launched from an L-1011 over the South Pacific and will soon settle into a very high-altitude Earth orbit, where it will study how ions in the solar wind interact with the plasma from interstellar space.
Scientists hope that IBEX will tell us more about the shape of the solar system’s protective “bubble”, which is created by the solar wind and shields us from harmful galactic cosmic rays.
Over the past four years the Voyager 1 and Voyager 2 spacecraft have both crossed the termination shock and sent back spectacular data on this region. However, as IBEX principal investigator David McComas explains, these data tell us only about the specific points at which the spacecraft crossed the termination shock. “It’s like having two excellent weather stations that provide detailed reports of the weather in their areas, but not having the satellite data that tell you how the weather fronts are changing,” he says. “For this global view we need IBEX.”
IBEX, being one of NASA’s small, low-cost Explorer missions, was launched from the underside of an aircraft, climbed to ~ 200km above Earth’s surface, at which point a PAM rocket fired and sent IBEX into a high–altitude orbit.
Posted by Joel Raupe at 10:05 PM