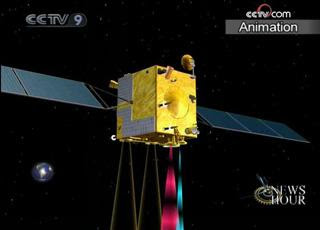 As much as we tease JAXA about its slow but, admittedly spectacular "dribble" of data, the challenge to at least the spirit of the Outer Space Treaty of 1967, and open access to datasets from scientific space exploration, nothing can compare with the absolute block on data, if any, being shared by the Chinese National Space Agency of results from over a year of Lunar orbital survey just completed by Chang'e 1.
A television video was released yesterday highlighting animated notions of the mission, along with news that the probe's consumables allow for at least a one-year extention of the secretive mission. CNSA has reported twice that Chang'e survived the shadowed periods of two terrestrial eclipses, along with their intention to send a lander to the Moon in 2012. So far, though CNSA has also claimed it is their intention to "map every inch" of the Lunar surface, they have released only one or two photographs.
While the Japanese have at least released spectacular value-added Terrain Camera tours of Tycho and orbital imagery from Kaguya's on-board HDTV camera, said by a man who should know, Senator Harrison Schmitt, to be "the closest thing to being in orbit since I was in orbit," JAXA's refusal to release raw data has been frustrating.
Compared to China, however, JAXA's open access has been positively breathtaking. The most noted photograph reportedly taken by Chang'e was proven authentic, despite some controversy that it was merely a reproduction of images taken by NASA's Lunar Orbiters. Nevertheless, the year of silence, amidst happy reports of the probes determined activity, has lead me to speculate that Chang'e may have suffered a breakdown.
Either Chang'e is disabled, or China simply refuses to show off more than the first configuration glimpses. Their continued bragging of the probes excellent health is falling on deaf ears. It might as well not exist at all.
Posted by Joel Raupe at 5:16 PM