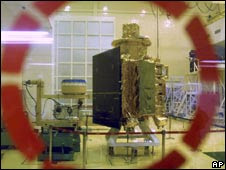 A little more than a year after the beginning of Japan's successful Kaguya mission began, M. Annadurai sees only the weather as a possible hindrance to the launch of India's Chandrayaan I, Oct. 22. The multi-national platform will carry experiments from eight nations, including Russia's LEND neutron sensor also installed on NASA's Lunar Reconnaissance Orbiter.

The LRO/LCROSS mission is on hold until 2009.

An update from New Dehli and an Update from the BBC
Posted by Joel Raupe at 1:17 AM