Global Topography and Gravity of the Moon Revealed by KAGUYA 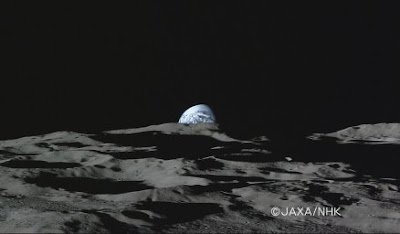 The elusive shape of the "lunoid," the shape, density and complexity of the mass of Earth's Moon, scientists claim, has finally been mapped. In an oral presentation to the 40th annual meeting of the Division of Planetary Sciences, American Astronomical Association, Dr. Sho Sasaki made announcement on behalf of JAXA and the National Astronomical Observatory of Japan.
"The Japanese lunar explorer KAGUYA (SELENE) was launched successfully on September 14th, 2007. KAGUYA has two small spin-stabilized subsatellites, Rstar (OKINA) and Vstar (OUNA) for gravity measurement. We can track the three satellites by new methods: 4-way Doppler tracking between the main satellite and Rstar for the far-side gravity and multi-frequency differential Very Long Baseline Interferometry (VLBI) tracking between Rstar and Vstar. The global lunar gravity field with unprecedented accuracy can be obtained.
"Through more than 6 months, precise gravity field including most of farside was obtained. The farside gravity field shows significant improvement from the previous model. Many circular features corresponding to impact structures are clearly identified. Some of the circular gravity anomalies in the free-air gravity apparently disappear in Bouguer anomaly map; the surface topography is a dominant source of free-air gravity anomalies and large impact structures are supported by lithosphere, which would lead to the difference of thermal history between nearside and farside.
"A possible cryptomare candidate (a circular gravity anomaly without topographic signature) was also found.
"KAGUYA has a laser altimeter (LALT). The first precise global topography data with range accuracy 5 meters have been produced by LALT. In the polar regions where CLEMENTINE did not cover, topographic features in the shadowed area are newly discovered.
"Solar illumination condition was calculated, and the region whose solar illumination rate is higher than 90% is very limited.
"Lunar mean radius is 1737.15 (±0.01) kilometers and the COM-COF offset is 1.94 kilometers. The amplitude of the power spectrum of topography spherical harmonics is larger than that of the previous model, at Love Number greater than 30.
"From the gravity and topography data, we obtain the distribution of the crustal thickness on the Moon. We also estimate the correlation between gravity and topography and localized admittance values. Gravity and topography observation of KAGUYA will continue until early 2009."
Posted by Joel Raupe at 7:35 PM