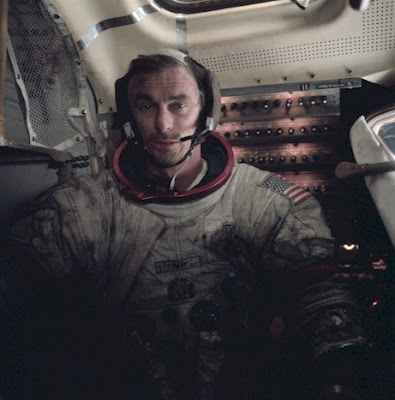 The iconic grime-invaded image of Apollo 17 Commander Gene Cernan, last man to walk on the Moon, snapped by Lunar Module Pilot Dr. Harrison Schmitt, Dec. 1972, and as recently restored from an original slide (AS17-145-22224HR). Cernan's expression seems somewhat laconic, so oon after re-entering the LM Ascent Stage for the final time, home on the Moon for three very full days. It was the end of their third and final EVA.
Soon after, however, the true extent of just three strolls and road trip, especially with an excited geologist along (the only scientist to walk on the Moon) can be seen in a lighter moment Schmitt captured here.
Cernan's experience, after spending more time on the Moon than any other human, is still repeatedly cited in scholarly papers as scientists grapple with the abrasive, perhaps even toxic, nature of Cernan's "invasive" lunar dust.
"The dust was very difficult to work in," Cernan later said, during debriefing, "and was a big hinderance. It obscured your vision if you let it get on your visor. It was almost like a dew or mist because it clung to everything. It got on every movable service. It got in the suits, and when we got out of our suits in the spacecraft in between EVAs, it got into the pours of our skin and got under our fingernails. And it didn't just get on the outside parts of our nails and get them dirty but, literally, it got down between the skin and the nail. It took three months for lunar dust to grow out from under our nails. It infiltrates." (Apollo Lunar Surface Journal, ALSJ, Apollo 17 Journal).
Posted by Joel Raupe at 12:19 AM