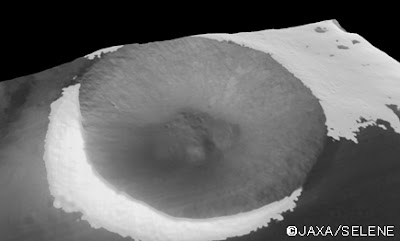 Chuck Wood and his LPOD can be counted on to let the English-speaking world know when JAXA shows off the latest goodies from Kaguya, now well into its second year in Lunar orbit. It's not unusual for research institutions to block open access to "raw" data from their planetary probes. The Japanese, however, apparently have two conflicts that keep the world waiting for monthly dribbles of images from Kaguya.
Just published to the Japanese language portion of the Flash Kaguya Image Gallery is the interior of Shackleton crater, positioned on the edge of the Lunar South Pole, the site chosen for what eventually may be NASA's permanent (or semi-permanent) manned Moon base, more than a decade from now.
Kagyua's representatives at the 39th Lunar and Planetary Science Conference in Houston, last March, according to Chuck, "very briefly flashed on the screen an image from their Kaguya spacecraft of the interior of Shackleton crater. This was remarkable because the rim of Shackleton is at the lunar south pole and the crater floor is in perpetual darkness."
Among conflicts for JAXA are its obligations under the Outer Space Treaty of 1967 to release data from remote sensing of other planets and its commercial agreement with Japanese state television, with whom it honors a prior claim. A second conflict is nationalistic, and JAXA's habit of releasing (months after its availability) its monthly dribble first on its Japanese language site, and sometimes weeks later on the English language portion.
Of course, no obligation requires the Japanese to release "new" data in English at all. Since Chuck Wood and others keep a watch on the Japanese language site, it makes little difference. Nevertheless, a comparison with raw images NASA-JPL delivers to the web from Phoenix and the MRO missions, and Cassini, is a stark demonstration of the differences in philosophy.
Perhaps JAXA and NHK's habits of releasing to the public processed images first in Japanese is pay back for NASA's not publishing in Japanese at all. More likely, however, the timing of this release of images revealing a part of the last unmapped portion of the Moon is meant to remind the world of Kaguya's long vigil, that ISRO's Chandrayaan, now climbing to a similar station in Lunar orbit, is an upstart.
If so, the pending arrivals of both the Chandrayaan and NASA's LRO/LCROSS missions are welcome news to those of us who continue to be impressed with Kaguya and it's obvious technical capabilities.
The Japanese could use the competition.
Posted by Joel Raupe at 10:47 AM