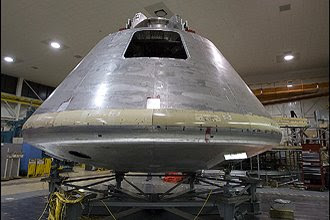 Former Congressman and House Science and Technology chairman Bob Walker (R-PA) is warning the outlook for Ares is "Grim." Now a lobbyist, Walker reported to his clients, the commissioners of Brevard County, Florida, Tuesday, emergency spending measures to bail out the federally-mandated sub-prime mortgage industry may put NASA's first civilian rocket since 1981 on the chopping block.
While NASA's immediate fate has enjoyed the attentions of both major presidential campaigns in 2008, Democrats in Congress are determined to add another $300 billion "stimulus package" to new federal debt that may total $1,490 billion before the new administration takes office January 20.
Walker reports Ares is "on the chopping block," one week before the debut of the Ares 1-x test booster, November 4. Instead, he reports plans are being drawn up for the Agency to support a continued manned support for ISS with military boosters.
The fate of Constellation may not be the decision of the next president, whomever is elected president next Tuesday. Congress is, after all, a "creature of Congress," and while congressional leaders Speaker Nancy Pelosi (D-CA) and Senate Majority Leader Harry Reid (D-NV) were generous in funding for the present federal Fiscal Year, with a full Billion beyond what NASA and the White House requested, cut backs are almost certain, perhaps before that period expires in October 2009.
On back ground, the friendliness of NASA and agencies like the FAA toward what has been considered a vital part of America's future space exploration timeline, private and commercial contributions to space station and low-earth orbit support is also in question. Democrats, likely to be in control of the 111th Congress, are determined to cut military spending, for example, particularly on new weapons systems, by as much as one-quarter, to fund expanded social spending.
Supporters of the Direct v.2.0 concept, using existing military-grade boosters received a report one week ago from NASA they say is, "deeply flawed." Direct advocates, lead by Steve Metschan of TeamVision Corp are preparing a response.
According to the Direct website, "DIRECT is an alternative approach to launching missions planned under NASA's new mandate: The Vision for Space Exploration (VSE).
"DIRECT would replace the separate Ares-I Crew Launch Vehicle (CLV) and Ares-V Cargo Launch Vehicle (CaLV) with one single "Jupiter" launcher, capable of performing both roles.
"This change to NASA's architecture completely removes the costs & risks associated with developing and operating a second launcher system, saving NASA $19 Billion in development costs, and a further $16 Billion in operational costs over the next 20 years.
"DIRECT's single launcher system would use existing Space Transportation System (AKA the Space Shuttle) facilities and hardware to lift over 45 tons (in basic configuration) up to more than 100 tons (with an Upper Stage)."
Whether money will be available for an accelerated alternative, whatever it might be, on a timeline that now may extend NASA timetable for a return to the Moon well into the 2020's in unknown.
The default on Fannie Mae and Freddie Mac home loans, mandated by the Community Investment Act of 1977, has sent shockwaves through the global economy. Congressionally authorized bailout of banks to prevent their failing in September has ushered in a period of federal austerity just as congressional Democrats had hoped to expand support and mandates for "affordable housing."
Read more from the Orlando Sentinel HERE.
Posted by Joel Raupe at 11:36 AM