Another spectactular set of Kaguya Images 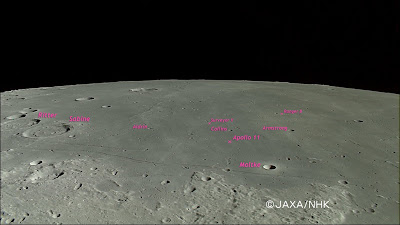 Once again appearing first on JAXA's Japanese language site, and, as always, weeks ahead of appearing on it's English site (as Chuck Wood at LPOD and others have noted) Japan's JAXA/NHK has finally released another series of HDTV stills from it's on-going Kaguya Lunar orbiter.
Included among these is another spectacular full-earthrise video from low overhead the rugged North Pole region, with a near Full Earth "upside down" over the seasonally well-lit north. And, this this time from a distance, Kaguya looks back at the dark South Pole valley rimmed by staggering Mount Malapert and featuring abyssal Shakleton Crater slipping silently away, under a setting Earth.
Another Terrain Camera reconstuction, perhaps not as spectacular as that done of breathtaking Tycho, is featured, taking the viewer on a close up journey into Taurus-Littrow Valley, the playground of Captain Gene Cernan and Dr. Harrison H. Schmitt of Apollo 17, the last men to walk on the Moon, nearly thirty-six years ago.
Alas, the Command Module Orbital Cameras of the mission took more detailed photographs, though the halo of the Descent Stage is where one thinks it ought to be, if you know where to look. The TC is computer generated, and has been used to varify camera angles taken from the surface.
An overhead of Fra Mauro, and the landing site of Apollo 14 is available, showing the rich flows and geology explored by Alan Shepard and Edgar Mitchell in 1971, south of Copernicus.
Zipped full screen video is available, well worth the download time, as it was at Tycho. And speaking of Tycho, a further enhanced and color version of the Tycho Tour was released, as well, though it hardly compares to the TC's stark black and white of the terraced walls and magnificent central peak still available at the site.
Along with other new regional shots from this past summer (click for close up of the above HERE, without captions) reminds lunar scientists of the renewed interest in areas on the Near Side, among them one especially chosen for its apparent smooth and flat "featurelessness," the southwestern interior of the Sea of Tranquillity.
The renewed interest, of course, are studies linking the implantation of Helium 3, the purported fuel of future fusion, of which the Moon abounds, and those oldest of exposed "fines" of regolith coincident with high optical maturity and the presense of iron oxide, according to studies. 3He appears to favor the smoothest and oldest seas of the Moon's Near Side, most especially the central Oceanus Procellarum southwest of Aristarchus Plateau, and, of all places, the whole of the Sea of Tranquillity.
Posted by Joel Raupe at 8:40 PM