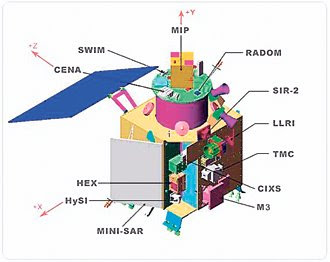 Yes, ISRO is still aiming for an October 22 launch from Sriharikota of its first lunar payload, Chandrayaan 1, bringing to fruition more than a decade of planning. So confident is the Indian Space Research Organisation in Chandrayaan's eventual success, rivaling Japan's Kaguya, now beginning it's second year on lunar orbit, it has announced plans of a manned mission as early as 2014.

Hat Tip to ITEXAMINER.com and Subhankar Kundu for outlining the eleven instrument payloads onboard, including the work of eight international partners.

Terrain Mapping Camera (TMC): TMC A CCD camera that has been developed by Indian Space Research Organisation (ISRO).It will map topography in both near and far side of the Moon and prepare a 3-dimensional atlas with high spatial and altitude resolution. This will help in understanding the lunar evolution process as well identify regions for detailed study.

Hyper Spectral Imager (HySI): HySI is a CCD camera that has been developed by ISRO. It will obtain spectroscopic data for mineralogical mapping of the lunar surface and improve existing data. It will also study the mineralogical composition in deep crater regions of Moon’s interior.

Lunar Laser Ranging Instrument (LLRI): Developed by ISRO, this payload will provide data for determining the accurate height of lunar surface features. It will also aid in determining the global topographical field of the Moon and also generate an improved model for the lunar gravity field.

Moon Impact Probe (MIP): The only probe to actually land on the Moon, it will demonstrate the technologies required to land a probe at a desired location on the moon. It will also qualify technologies required for future soft landing missions and explore moon from a close range.MIP has also been developed by ISRO.

Near-IR (NIR) Spectrometer (SIR-2) : SIR-2 is developed by the Max-Plank-Institute for Solar System Science, through the Max-Plank Society, Germany and ESA to analyze in unprecedented detail the lunar surface in various geological/mineralogical and topographical units.Sub Kev Atom reflecting Analyser (SARA): SARA is realized through ESA, in collaboration with Swedish Institute of Space Physics, Sweden and Space Physics Laboratory, Vikram Sarabhai Space Centre, ISRO. The aim of this instrument is to study the surface composition of the moon, the way the moon’s surface reacts with the solar wind and magnetic anomalies associated with the surface of the moon.

Radiation Dose Monitor Experiment (RADOM): RADOM Payload is from Bulgarian Academy of Sciences. RADOM will qualitatively and quantitatively characterise the radiation environment in a region of space near the moon. Provide an estimate of the dose map around Moon at different altitudes and latitudes.

Miniature Synthetic Aperture Radar (MiniSAR): Miniature Synthetic Aperture Radar (MiniSAR) is from Applied Physics Laboratory, Johns Hopkins University and Naval Air Warfare Centre, USA through NASA. The main aim of this payload is to detect water ice in the permanently shadowed regions on the Lunar poles up to a depth of a few meters. This radar mapper will allow viewing of all permanently shadowed areas on the Moon, regardless of whether sunlight is available or the angle is not satisfactory.