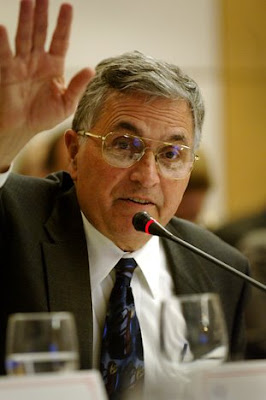 Michael Braukus NASA Washington -NASA Advisory Council Chairman Harrison "Jack" H. Schmitt announced Thursday he was leaving the council. Fellow council member Kenneth Ford will succeed him as chairman effective immediately. The NASA Advisory Council provides advice to the NASA administrator on important program and policy matters related to the U.S. space program.
"My service as chairman of Administrator Mike Griffin's advisory council has been one of my most rewarding professional experiences," Schmitt said. "The members of the council represent the finest and most diverse group of advisors that could be assembled, and I am greatly indebted to them for the stimulating interaction and productive deliberations we have had during the last three years. The administrator, NASA and the nation have been well served by their dedication and hard work, and I am certain that even more productive activity will take place under the guidance of the new chairman, Ken Ford."
The council consists of experts from various fields offering knowledge of the multitude of functions within the agency. Council recommendations and advice are critical to the agency's timely strategic and tactical decisions about NASA's mission.
"Sen. Schmitt has provided invaluable advice and leadership for over three years as Chair of the NASA Advisory Council," Griffin said. "He was instrumental in reformulating the NAC to fulfill its proper role as NASA's primary external advisory group. The experience he has brought to the NAC as a scientist, astronaut and former U.S. senator has been of tremendous value to me in helping to manage the agency. I am deeply grateful for both his long friendship and his commitment of service to NASA and the nation."
Schmitt has served as chair of the NASA Advisory Council since November 2005. Under his leadership, the council developed and submitted more than 100 recommendations to the NASA administrator in the areas of aeronautics, audit and finance, exploration, human capital, science, and space operations. These recommendations significantly contributed to NASA's implementation of the agency's new space exploration plans.
Schmitt also was the primary advocate behind the council's February 2007 workshop that produced 35 recommendations covering exploration science, lunar science, lunar-based science, and other research enabled by the emerging exploration architecture for returning humans to the moon by 2020. The workshop was a key part of the council's obligation to advise the administrator about science associated with the nation's return to the moon while making its findings directly available to NASA's exploration and science directorates. Schmitt also led the council's initiative to build a strong relationship with the National Institute of Health and other entities for the utilization of the International Space Station as a national laboratory.
Schmitt is a geologist, former NASA astronaut and former U.S. senator. He and his Apollo 17 crewmate, Eugene Cernan, were the last two people to walk on the moon.
Kenneth Ford has been a member of the NASA Advisory Council since June 2007, serving on the Exploration Committee. He is founder and director of the Florida Institute for Human and Machine Cognition, a statewide not-for-profit research institute of the state university system of Florida. The institute features world-class scientists and engineers investigating a broad range of topics related to building technological systems that are aimed at amplifying and extending human cognitive and perceptual capacities.
In January 1997, NASA asked Ford to develop and direct its new Center of Excellence in Information Technology at NASA's Ames Research Center at Moffett Field, Calif. He served as both associate center director and director of the Center of Excellence. Ford was awarded the NASA Outstanding Leadership Medal in July 1999.
Ford is the author of hundreds of scientific papers and six books. His research interests include artificial intelligence, cognitive science, human-centered computing, and entrepreneurship in government and academia. He earned a Ph.D. in computer science from Tulane University. Ford is a fellow of the Association for the Advancement of Artificial Intelligence and was the 2008 recipient of the Robert S. Englemore Memorial Award for his work in artificial intelligence.
In 2005, Ford was appointed to the Air Force Science Advisory Board. President George W. Bush nominated Ford to serve a six-year term on the National Science Board in October 2002.
For more information about the NASA Advisory Council, visit:
http://www.hq.nasa.gov/office/oer/nac
Posted by Joel Raupe at 1:50 AM