The thinking behind the GRAIL twins

A useful view of our heterogeneous Moon. A practical illustration of the thinking behind the GRAIL project. From several thousand kilometers above the southern hemisphere and just below the equator of the lunar Farside it’s easier to see our Moon is “lumpy;” perhaps like the asteroids, it's own mass isn't high enough to crush it into a unified solid. From the standpoint of gravity the Moon retains the the memory of the smaller solid and semi-solid bodies from both before and after it's original formation. So nothing stays in close orbit around the Moon for very long without getting a frequent boost, and such boosts need fuel and fuel eventually runs out. This false color map of the lunar surface shows, in low resolution, differences from average elevation, or datum. Mare Orientale is on the right, and just beyond, so a crescent of the Nearside’s is visible. The expanse of the Farside here is defined, by the ancient South Pole Aitken basin, with the Moon's thinnest crusts, below center left, and by the Moon’s highest elevations and thickest crusts in the Farside highlands spread above the SPA rim (yellow box shows field of view in the next illustration [NASA/GSFC/MSFC/LOLA/LMMP/LP].


The Lunar Reconnaissance Orbiter (LRO) has orbited the Moon over 10,000 times since June 2009, mostly in a low and circular polar orbit. It requires a monthly boost to keep its record-breaking mission going. A common demonstration of the Moon's mass concentration (MASCON) problem is a thought experiment. A future astronaut stands on the rim of the Nearside impact basin Mare Imbrium holding a weight suspended a meter below a gloved hand sees that it doesn't hang straight down. Instead it hangs angling slightly toward the center of the basin hundreds of kilometers away. Anything in orbit is alternately tugged or gains slack changing its speed, causing it to eventually crash. This inconvenience, when carefully recorded and studied, is also a good way of mapping the Moon's interior in 3D.

The elevation map above shows how radically different the Moon’s Farside is from the familiar Nearside. In a photographs the extent of the 4 billion year-old SPA basin and the higher ground and its rim don’t stand out nearly as well. The map is plotted from millions of laser points measured from LRO's orbit to and from the lunar surface by the LOLA instrument, shown here using the ILIADS program available from NASA Marshall Space Flight Center. The yellow rectangle shows the field of view shown in an August 2011 release of LOLA science from the Goddard Space Flight Center. 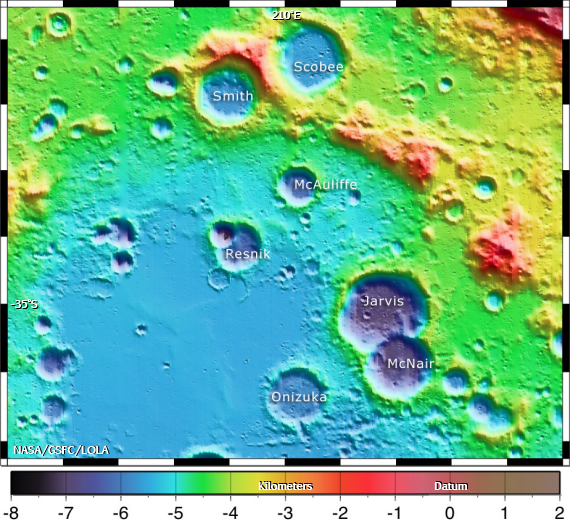 NASA/GSFC, August 15, 2011 - Twenty-five years have passed since seven brave astronauts lost their lives in the Challenger accident. As the Shuttle program comes to an end, we are reminded of those who lost their lives in the pursuit of human exploration. Shortly after the accident, the Challenger astronauts were memorialized by having lunar craters named after them. These seven craters, located on the far side of the Moon in the Apollo Basin, expose deep portions of the lunar crust.

This LOLA image reveals that the depths of McNair and Jarvis craters, in particular, reach nearly 7 km below the lunar datum (the Moon's equivalent of 'sea level'). The depth of McNair and Jarvis is due to their placement within the large Apollo Basin (an existing topographic low) as well as the Apollo Basins location in the even larger South Pole-Aitken Basin. When combined with data from other LRO instruments such as LROC and Diviner, and instruments aboard other spacecraft such as the Moon Mineralogy Mapper (M3) aboard Chandrayaan-1, the complex nature of the Challenger craters is revealed. Data from the M3 instrument reveal that Jarvis crater's composition may represents a deep portion of the lunar crust. 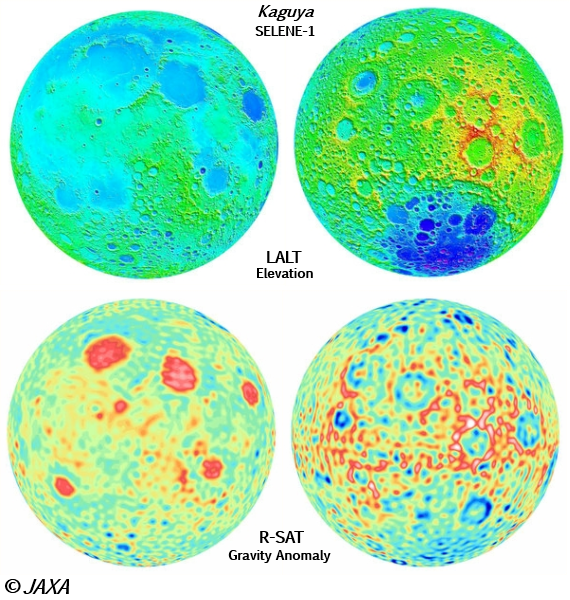 Japan’s lunar orbiter Kaguya (SELENE-1, 2007-2009) vastly added to our knowledge about the “hidden Moon” originally gathered through the Apollo era and afterward, stitched together by 2005. Along with the first HDTV from lunar orbit, Kaguya was a platform for a variety of instruments, including laser altimetry, like LRO. The Kaguya LALT system itself built up an elevation map that is only very recently being surpassed by LOLA during the past two years.

Using their links with Kaguya, with its sub-satellite R-SAT, and in a manner very much like the mission plan for GRAIL-A and B, JAXA investigators delicately measured Doppler shift and subtle light-speed changes between each orbiting spacecraft and with the ground to built-up a detailed map of the Moon’s "gravimetric anomalies."

Together with the unprecedented detail of the Moon’s crustal thicknesses, seen in maps like the one below, Kaguya presented scientists with new and very much more detailed faces of the Moon. Kaguya investigators also helped refine the elusive center of the Moon, from within 20 to 2 kilometers, much more. 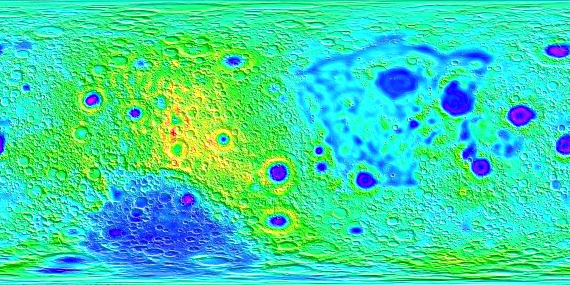 The relative thickness of the lunar crust as teased out by Japan's Kaguya orbiter and its sub-satellite R-SAT. The Moon's MASCONS and 'negative gravity anomalies' don't necessarily manifest themselves in surface features, like the one associated with Mare Imbrium.[JAXA].

GRAIL-A and B will join LRO and the recommissioned ARTEMIS twins for a grand total five American unmanned lunar missions, all orbiting the Moon at the same time by the end of the year. The skies above the Moon will become nearly as crowded as those of Mars.

The GRAIL twins will pick up the task of mapping our lumpy Moon’s mass, ARTEMIS the intricacies of the Moon’s plasma wake and its interaction with Solar wind as the Moon orbits through Earth’s magneto-tail with LRO continuing to map the lunar surface from more lasting, slightly higher polar orbit.

All this latter-day renewed interest in the Moon began as preparation for an eventual return, inspired by the loss of Columbia in 2003. That original timeline for renewed, extended human activity on the Moon may seem much further away once again, for the moment, but these unmanned “precursor missions” set into motion through the vagaries of reaction to tragedy or short-term public policy shifts are well along in the pipeline, on time and under budget. 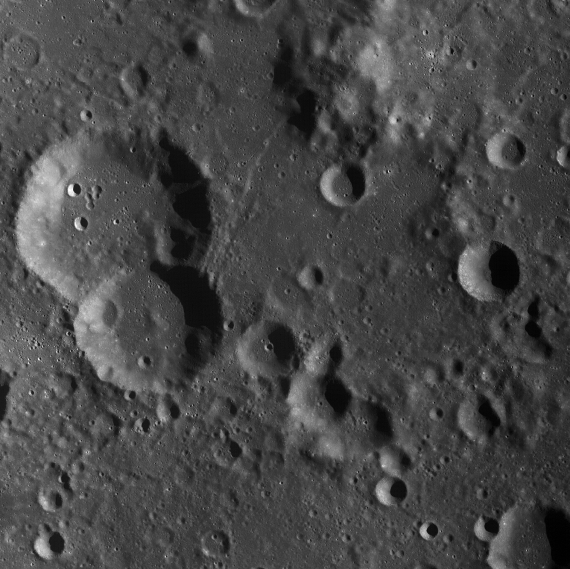 LROC Wide Angle Camera (WAC) monochrome (604nm) mosaic of northeastern Apollo basin, from observations in LRO orbits 2068 and 2069, December 8, 2009; field of view roughly 120 km, resolution 78 meters per pixel, incidence 70° The depth of the interior floor of Jarvis and McNair, the larger and smaller of the two co-joined craters, respectively, and the largest feature seen above, are roughly 7,000 meters below lunar mean elevation. [NASA/GSFC/Arizona State University].
Posted by Joel Raupe at 3:28 PM