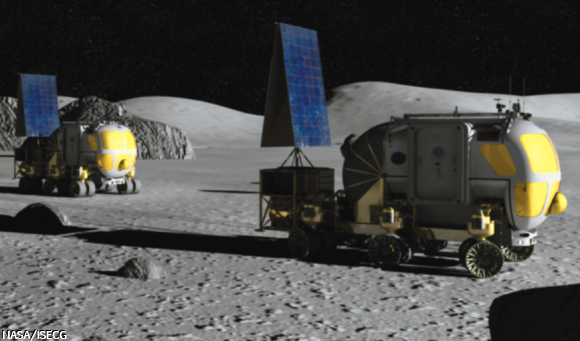 "Small pressurized rovers on the moon will increase crew mobility and can be reused at different landing sites." A familiar notion, as envisioned by the International Space Exploration Coordination Group in their "The Global Exploration Strategy: The Framework for Coordination," developed by the 14 national space agencies. The study presents an International road map with a similarly familiar fork in the road ahead, two decidedly different directions beyond low Earth orbit, Asteroid Next and Moon Next [NASA/ISECG]. 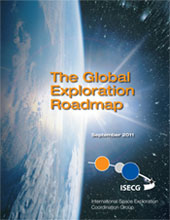 
NASA is releasing the initial version of a Global Exploration Roadmap (GER) developed by the International Space Exploration Coordination Group (ISECG). This roadmap is the culmination of work by 12 space agencies, including NASA, during the past year to advance coordinated space exploration.

The GER begins with the International Space Station and expands human presence throughout the solar system, leading ultimately to crewed missions to explore the surface of Mars.

The roadmap identifies two potential pathways: "Asteroid Next" and "Moon Next." Each pathway represents a mission scenario that covers a 25-year period with a logical sequence of robotic and human missions. Both pathways were deemed practical approaches to address common high-level exploration goals developed by the participating agencies, recognizing that individual preferences among them may vary.

To view the document, visit: http://www.nasa.gov/exploration/about/isecg/ or click on the link in the first paragraph above.
Posted by Joel Raupe at 7:59 PM