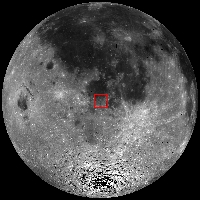 Crater Vitello, located at the southern edge of Mare Humorum, is a floor fractured crater.

The slopes, including the fractures and central peaks are already degraded, and are almost completely covered by low-reflectance, fine-grained materials. Boulders are discernible on the slopes, but not fresh outcrops.