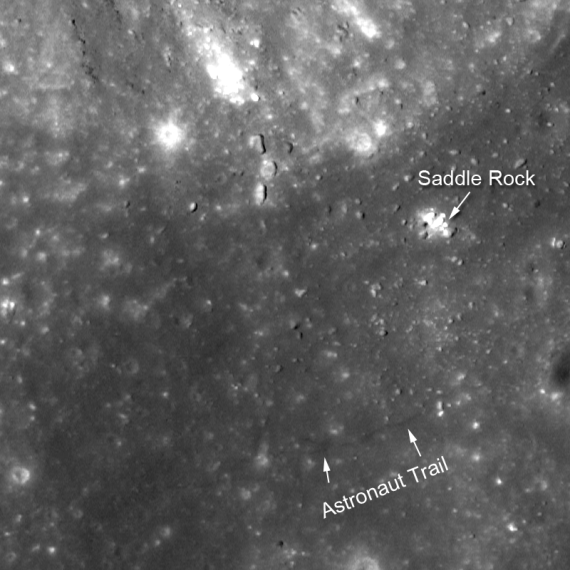 Saddle rock, so close! Apollo 14 astronauts hiked up the flanks of Cone crater and got as far as Saddle rock before they had to turn back. A few tens of meters and what a view! LROC image 25 cm pixel scale, image 200 meters wide, LROC Narrow Angle Camera observations M168319885, LRO orbit 9939, September 4, 2011; north is up. View the full size LROC Featured Image HERE [NASA/GSFC/Arizona State University].

The 6 September 2011 LROC Featured Image described the special low orbit month that allowed LROC to snap its highest resolution images of the Apollo 12, 14 and 17 landing sites. That post featured the Apollo 17 site, while today's Featured Image looks in detail at the Apollo 14 image. 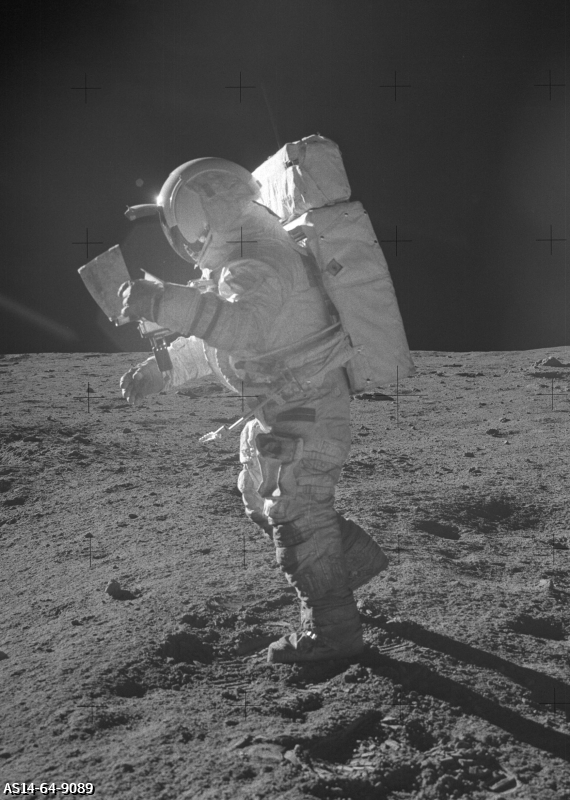 In February 1971 Edgar Mitchell examines the map, looking for landmarks, as he and Alan Shepard work to find the rim of their goal, Cone crater. It would later be determined (and LROC would confirm) that the Apollo 14 astronauts were very close.

What can we see better at the Apollo 14 site compared to previous images (9 August 2009, 4 February 2011)? The increased resolution allows indentification of the astronaut backpacks (PLSS), the small two wheeled cart (Modularized Equipment Transporter or MET) that the astronauts used to transport tools and samples, and the high gain antenna (HGEA). You can also make out one of the LM legs at the  7 o'clock position on the descent stage. The pixel size of the NAC image is not high enough that all these objects can be resolved, but rather we can detect that they are there. Only through comparison with surface photography can we definitively identify the smaller objects left by the astronauts. With the smaller pixel size we can begin to resolve the descent stage, we can see its shape, brightness differences on the deck, and footpads. 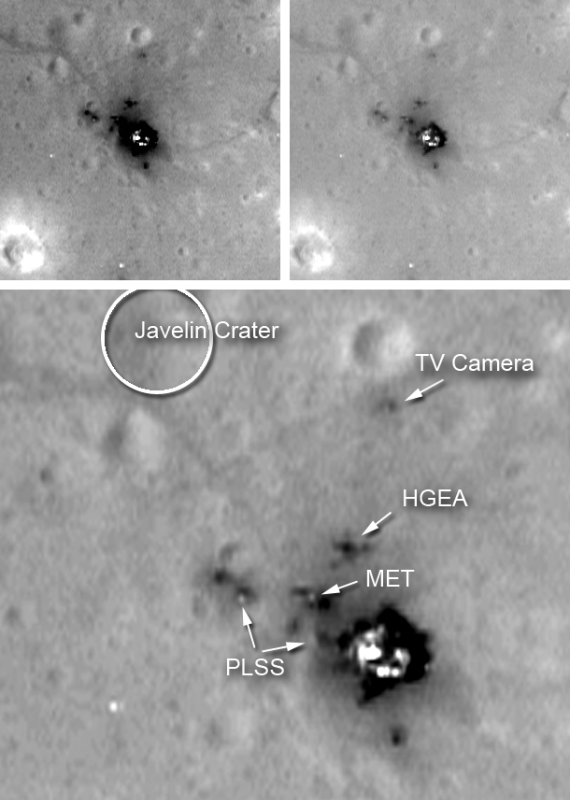 New LROC low orbit image of the Apollo 14 Lunar Module descent stage. (See a comparable view as seen by the astronauts HERE.) Upper two panels show new image but with different contrast stretches, and the lower image is an enlarged version. Each scene is 75 meters wide, north is up, Sun is from the west (left). [NASA/GSFC/Arizona State University].

The traverse up Cone crater was the main science goal for Al Shepard and Ed Mitchell. Impact craters spread out ejecta in a very predictable manner. The outer edges of the ejecta are mostly composed of material from or near the surface where the bolide (asteroid or comet) impacted, while the ejecta at the rim of the crater comes from deepest regions within the crater. So it is a "simple" matter of walking towards the crater and collecting samples to reconstruct an accurate picture of the original subsurface. Well simple in principle. 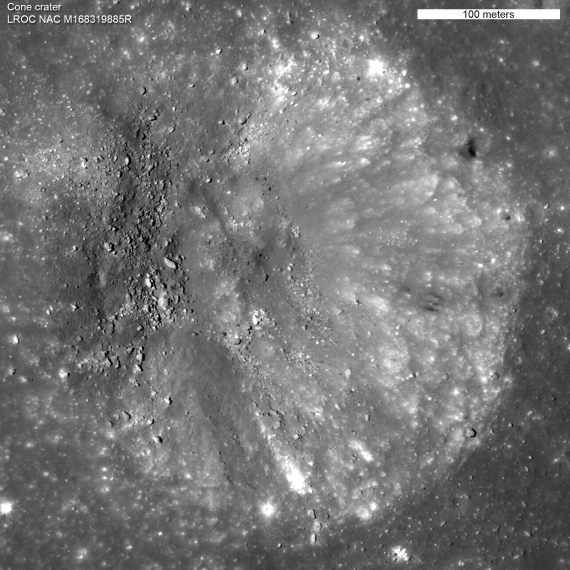 LROC NAC low orbit image of Cone crater, near the Apollo 14 landing site. Image is 400 meters wide, north is up, Sun is from the west (left). View the full-size image HERE [NASA/GSFC/Arizona State University].
Imagine hiking up the flanks of Cone crater with no compass (the Moon does not have a magnetic field so a compass is useless), only a very general map, carrying a heavy backpack, dragging a small wheeled cart loaded with tools, restricted vision from inside a helmet, and very strict time constraints! Al and Ed made it as close as  Saddle rock, which is only about 20 or 30 meters from the rim! However, the astronauts did not know they were that close. During the traverse they were temporarily bewildered as to their exact location. As it turns out, while they met 100% of the geologic sampling goals, they just missed out on the spectacular view into Cone crater.

The astronaut trails are not so distinct near Cone crater. Here the astronauts were out of the area that was scoured by the descent stage engine upon landing. The scouring produced a distinct bright halo at all the landing sites, most likely due to the finest particles being blown away from the spot just below the engine in the final seconds of landing. These bright particles were dispersed more or less evenly around the Lunar Module creating the halo effect. As astronauts walked around they kicked upper darker soil from beneath the halo creating distinct trails. Outside of the halo the soil kicked up may not have had as much contrast and is thus harder to spot.

Be sure to watch our movie describing the landing site!