A mission to find the missing lunar module 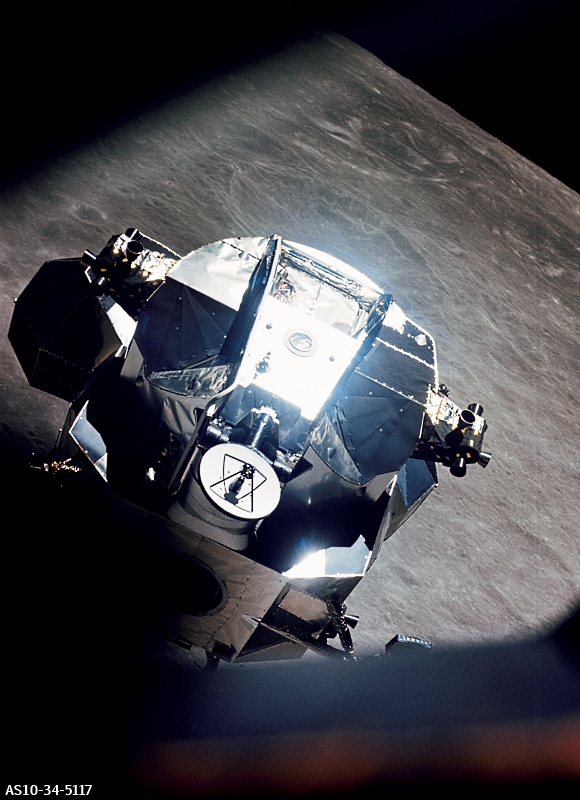 Tom Stafford and Gene Cernan in the Apollo 10 lunar module "Snoopy" prepare to dock with John Young, who snapped this picture on May 23, 1969. Away only eight hours Stafford and Cernan put the LM into a transfer orbit and descended to 14.4 km above the lunar surface before dropping the landing stage and firing the critical ascent stage six subsequent missions would depend upon to return them to ferry them back the Command Module and eventually to Earth. It was only the second time humans had visited the Moon's vicinity less than two months before Apollo 11. When later Jettisoned, the LM ascent stage engine was ignited remotely, on a trajectory placing the vehicle in orbit around the Sun, where it is presumed to remain to the present day. "Snoopy" is the only intact LM ascent stage remaining of the ten full Apollo lunar landers eventually launched into space [NASA/JSC].


Where is the Apollo 10 Lunar capsule? It’s somewhere out there — orbiting the Sun — and there’s a new initiative to try and find it!

The Apollo 10 mission launched on May 18, 1968 and was a manned “dry run” for its successor Apollo 11, testing all of the procedures and components of a Moon landing without actually landing on the Moon itself.

After carrying out a successful lunar orbit and docking procedure, the Lunar Module (called “Snoopy”) was jettisoned and sent into an orbit around the Sun.

After 42 years, it’s believed to still be in a heliocentric orbit and a team of UK and international astronomers working with schools are going to try and find it.