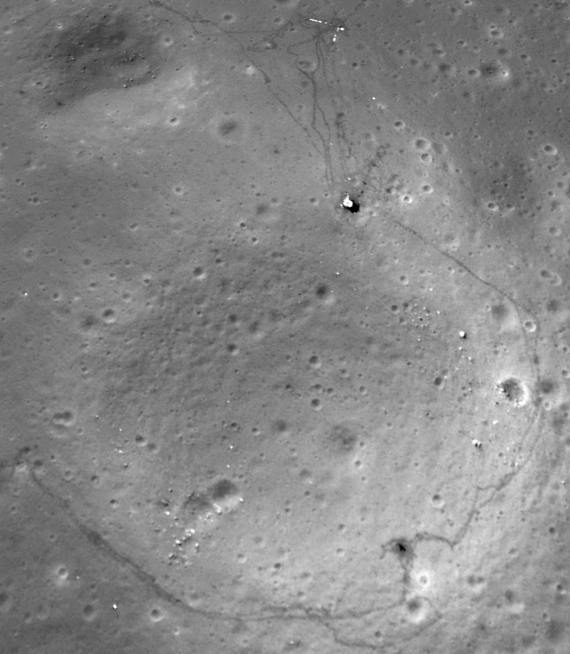 Foreshortened view west over Surveyor Crater in Oceanus Procellarum, landing site for two milestone American lunar missions, Surveyor 3 (bottom right) and Apollo 12, with it's unique contribution of footprints left behind by Pete Conrad and Alan Bean in November 1969. This second manned landing on the Moon was an important demonstration of precision, in target selection and in the targeted landing needed for the later Apollo "J" missions [NASA/GSFC/Arizona State University]. 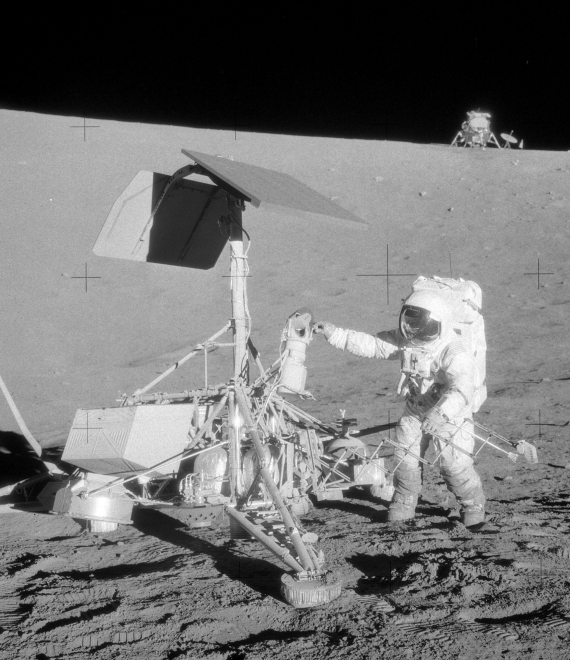 Finding the location of Surveyor 3, already on the Moon for nearly two years, was a remarkable achievement. Mission planners didn't exactly guess where the lander rested, but no photograph of it from orbit existed. Lunar Orbiter images of the landing site were taken a few months before it's landing. Pete Conrad has the remote shovel and surface camera, which were removed and returned by Apollo 12 for study, in this "tourist" image taken by lunar module commander Al Bean [NASA/JSC]. 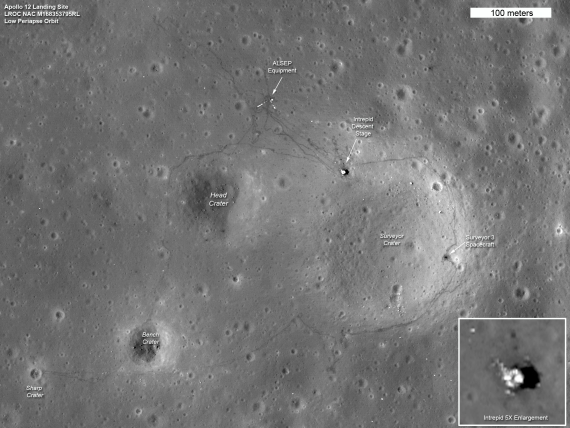 The tracks made in 1969 by astronauts Pete Conrad and Alan Bean, the third and fourth humans to walk on the moon, can be seen in this LRO image of the Apollo 12 site. The location of the descent stage for Apollo 12's lunar module, Intrepid, also can be seen.

Conrad and Bean performed two moon walks on this flat lava plain in the Oceanus Procellarum region of the moon. In the first walk, they collected samples and chose the location for the lunar monitoring equipment known as the Apollo Lunar Surface Experiments Package (ALSEP). The ALSEP sent scientific data about the moon's interior and surface environment back to Earth for more than seven years.

One of the details visible in this image is a bright L-shape that marks the locations of cables running from ALSEP's central station to two of its instruments. These instruments are probably (left) the Suprathermal Ion Detector Experiment, or SIDE, which studied positively charged particles near the moon's surface, and (right) the Lunar Surface Magnetometer, or LSM, which looked for variations in the moon's magnetic field over time; these two instruments had the longest cables running from the central station. Though the cables are much too small to be seen directly, they show up because the material they are made from reflects light very well.

In the second moon walk, Conrad and Bean set out from the descent stage and looped around Head crater, visiting Bench crater and Sharp crater, then headed east and north to the landing site of Surveyor 3. There, the astronauts collected some hardware from the unmanned Surveyor spacecraft, which had landed two years earlier.

The two astronauts covered this entire area on foot, carrying all of their tools and equipment and more than 32 kilograms (roughly 60 pounds) of lunar samples.