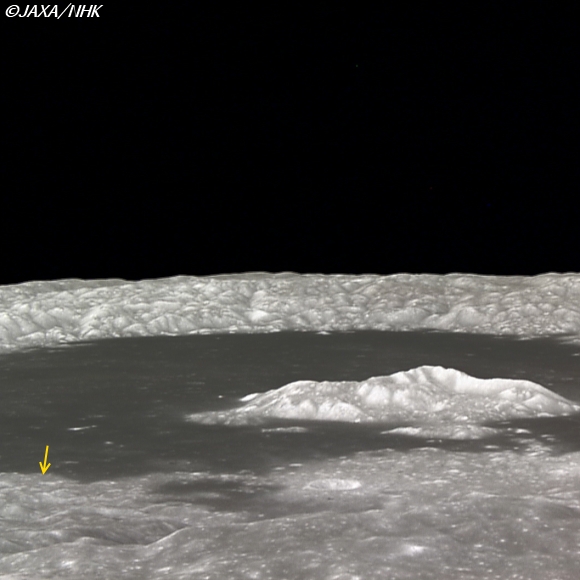 Central segment from HDTV still returned by Japan's lunar orbiter Kaguya (SELENE-1, 2007. This oblique, long-range view across the craggy expansive floor and central peak from the north shows Tsiolkovsky crater's floor. It's prominent on the farside because such dark features are far fewer here than on the Nearside. The slumped inner circumference of Tsiolkovsky's rim glowers several kilometers over its floor, an area where the Naval Research Lab, MIT and NASA hope one day to eventually deploy a radio array shielded from man-made interference. Such a facility could probe the cosmological "Dark Ages," a poorly understood 200 million year-long time between the Big Bang and the formation of earliest stars and galaxies.

LROC used it's Narrow Angle Camera (NAC) to study the contact boundary between rugged highland and Tsiolkovsky's relatively flat and darker floor. (The area shown in a Featured Image released September 28, 2011 is indicated by the yellow arrow) [JAXA/NHK/SELENE]. 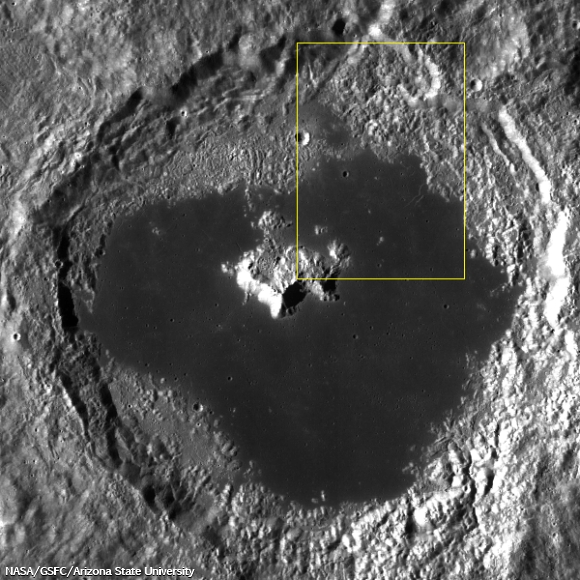 The mare plain of Tsiolkovsky stood out plainly in the first images of the lunar Farside returned by the Soviet probe Luna 3 in 1959, highlighting from the start the striking differences between the familiar features of the Moon's nearside and an entire hemisphere never before seen by human eyes. The northeastern contact area highlighted below in a more detailed look at this part of the LROC WAC 100 meter resolution Global Mosaic is boxed in yellow [NASA/GSFC/Arizona State University]. 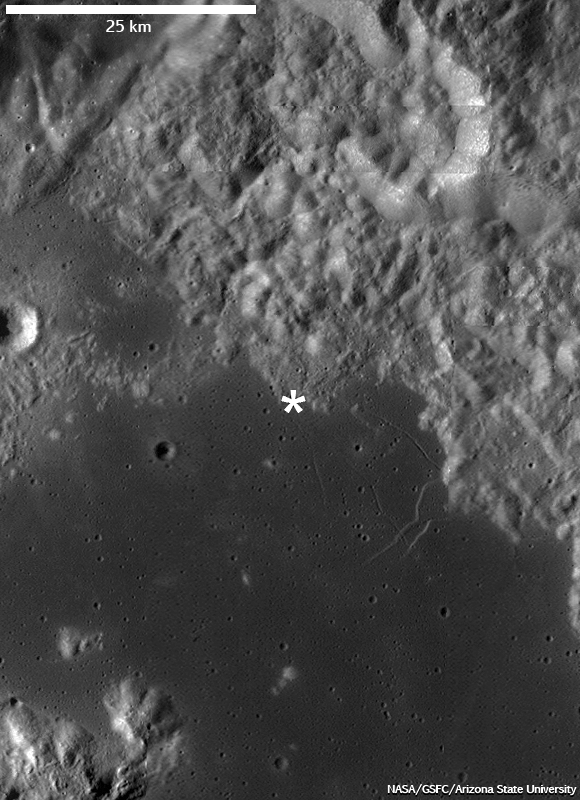 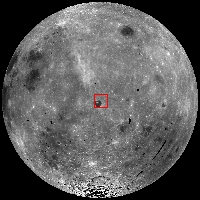 
Tsiolkovsky crater is a stunning example of a complex crater and is located on the farside (185 km diameter; 20.46°S, 129.06°E). Many geological features are observed within and around this impact crater, including a central peak, terraced walls, extensive ejecta, and a partially mare-filled floor. Tsiolkovskiy is an experiment in mare basalt flooding that is frozen in time and contains one of only a few mare deposits on the lunar farside. When we usually think of mare basalts, we mentally picture the vast nearside basalts, probably because we see them so clearly during a full Moon. These nearside basalts fill (or just nearly fill) the large impact basins that formed early in the Moon's geologic history, but the basalts that flooded Tsiolkovsky (as well as those that formed Mare Moscoviense and Mare Orientale, for example) only partially flooded these farside basins. Thus, we can use these basins to study the geology of the farside mare deposits and the timing and extent of volcanism on the lunar farside.

Because substantial lateral mixing of materials on the Moon is limited, the boundary between the mare and the highlands within Tsiolkovskiy crater is particularly obvious. In the opening image, the high-reflectance highlands material in which Tsiolkovskiy formed is embayed by the lower-reflectance mare basalt. The area of the crater floor flooded by basalt is smooth and has low reflectance while the central peak, crater walls, and portions of the floor remain relatively unchanged except for the accumulation of small impacts (meters to ~5 km diameter) over geologic time. 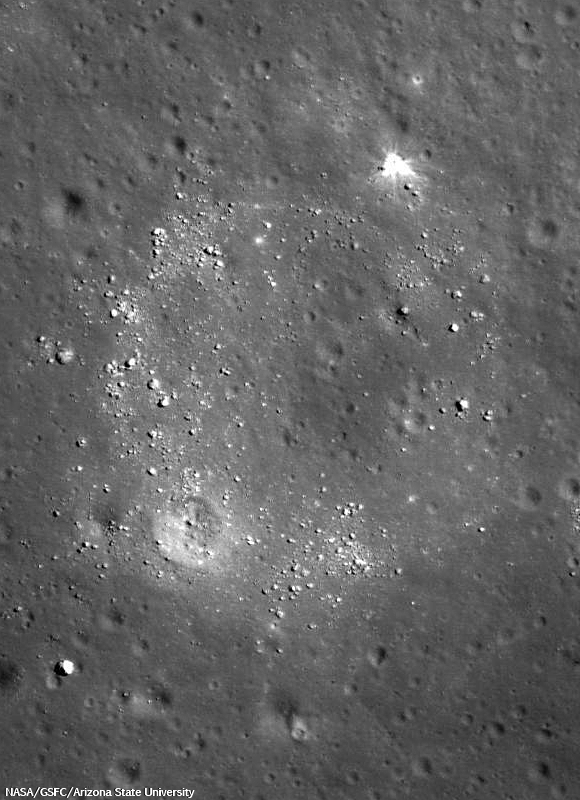 Full 60 centimeter per pixel resolution close-up of LROC Narrow Angle Camera (NAC) observation M159100547R. LRO orbit 8580, May 3, 2011, showing a small part of the the boundary between mare and highland material in Tsiolkovsky. Instead of an obvious contact boundary between these units the change from highland to mare is gradational at this scale. The degraded crater at center has served as a slope trap for high-reflectance material that originated from the high crater wall, well outside this field of view of only roughly 350 meters. View the 600 meter-wide original LROC image HERE [NASA/GSFC/Arizona State University].


However, the boundary between the highlands and the mare in Tsiolkovsky is not so well defined at 60 cm/pixel in the LROC NAC images. Why is this the case? To answer, we must consider the way material moves on the Moon. Earlier we said that substantial lateral mixing on the Moon is limited, which is true. Impacts excavate material that is moved laterally, thus mixing local materials. With enough impacts, the albedo differences between highlands and mare will blur and eventually disappear. The fact that we see rays extending out long distances from Copernican-aged impacts show that lateral mixing occurs over great distances. So why can we still see the highlands-mare boundary so sharply in the WAC images? Close examination of that same boundary in the NAC images shows the boundary to be not so sharp. At the scale of the NAC, you can see that impact cratering is slowly blurring the boundary. Have you experienced this effect in your travels here on Earth? Perhaps you have planned an adventure using a geologic map or a map based on satellite images or airplane photography only to find that the well-defined boundary you noticed on the map is not so easy to spot on the ground. If you haven't, well, perhaps it is time to plan your next adventure!


Prowl around the mare-highlands boundary in Tsiolkovsky crater in the full LROC NAC image!