Small crater at the southern rim of Menelaus 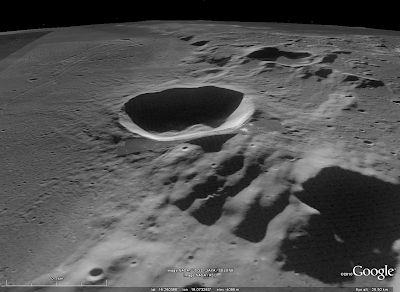 Simulated view looking west from 26 km over the southern edge of Serenitatis basin at Menelaus, in context. The Narrow Angle Camera frames from which the LROC featured image was cropped can be seen as the long, slightly darker rectangular strip running north to south over Menelaus' western rim - see full-sized image HERE. The bright fresh crater can be seen on the crater's southwest rim. The contrast of terrains straddled by Menelaus is stark, between Serenitatis on the north and the highly grooved mountains on the south. Mare Tranquilliatis is at upper right. Rimae Menelaus marks the boundary of basalt melt fills, older and later partial inundation. Menelaus ejecta blanket stretches into (and over) the older Serenitatis fill - and an interior deeper (-4200 meter) than the basin's fill would seem to indicate Menelaus is younger than most features seen here [NASA/GSFC/Arizona State University - Google Earth (v.5.3)]. 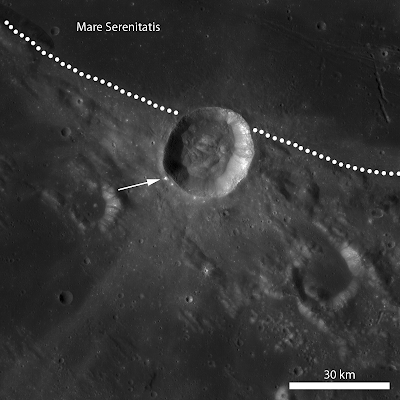 LROC Wide Angle Camera mosaic of Menelaus crater (16.3°N, 16.0°E), at the boundary between Mare Serenitatis and the highlands (dotted line). Broad ejecta rays extend along the mare-highland boundary and also in the NE-SW direction. In this image, the ejecta ray extending to the SW is easier to distinguish than the ray extending into Mare Serenitatis. The arrow marks the location of a recent 350 meter diameter impact near the rim of Menelaus. A full-sized view is HERE [NASA/GSFC/Arizona State University].
Lillian Ostrach
LROC News System 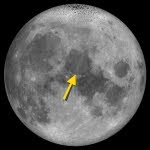 Menelaus crater (27 km diameter) straddles the highland-mare boundary at the southern margin of Mare Serenitatis. For years, scientists have wondered why Menelaus crater exhibits such a distinctive ray pattern. The distinctive ejecta pattern is partly a result of an oblique impact angle of the bolide that formed Menelaus. The ejecta rays are high reflectance relative to the surrounding terrain, but are these maturity or compositional rays? In most cases, a well-defined, high reflectance ray pattern suggests the relative youth of an impact crater. However, Menelaus crater formed in highland material, so Menelaus' rays may result more from compositional differences between the excavated material and the surrounding region, rather than the relative youth of the ejecta deposits. In fact, the optical maturity map for Menelaus crater, which is derived from Clementine multispectral data, supports this hypothesis because the crater rays are not visible, indicating that the rays are relatively mature (bright areas are immature). 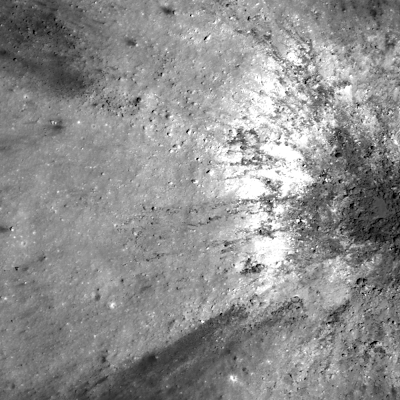 Materials of different reflectance are exposed by a 350 meter diameter fresh impact crater near the southern rim of Menelaus (16.3°N, 16.0°E). The western wall of this small impact crater appears to be composed primarily of very high reflectance material. Image field of view is 400 meters, from LROC Narrow Angle Camera observation M126826332R, LRO orbit 3824, April 25, 2010 (Altitude 40.71 km, resolution 48 cm per pixel; illumination is from the right (west). A fill-size view is available HERE [NASA/GSFC/Arizona State University].
Small craters, like the one above, near larger craters (less than 1 kilometer in diameter) help scientists unravel questions about larger impact events. This small crater is visible in Apollo Metric images and also in the Clementine optical maturity map; in the maturity map, the crater is bright and thus the ejecta material is interpreted to be immature. We know that impacts into ejecta blankets sample the material excavated during crater formation, and this recent impact into Menelaus ejecta effectively exposes material, most likely of anorthositic composition that was brought up from the floor of Menelaus. Its reflectance is low because of its physical state (glassy), not because it is a different rock type.

So, what does this small crater tell us about Menelaus crater? Since the small crater exposes immature Menelaus ejecta, we know that the surface of Menelaus is mature and thus the Menalaus rays show up due to a compositional difference (highlands on mare) and not because of a maturity contrast. This small crater provides an excellent opportunity for future astronauts to study compositional and maturity rays at the same location!

Discover the ejecta patterns of this small crater for yourself in the full LROC NAC image!
Related posts:
Splendors of Mare Smythii
May 20, 2010
Rima Bode: Constellation Region of Interest
May 18, 2010
Small crater on the wall of Metius B
October 19, 2009
Ejecta sweeps the surface
October 11, 2009
Ejecta Blanket
September 23, 2009 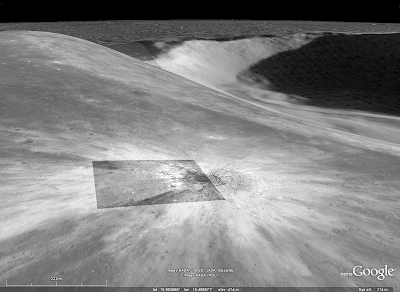 LROC Featured Image in context, again, on the southwest rim of Menelaus, a crater that is itself on the southern tier of Serenitatis basin (the northern horizon - see full-sized image HERE). The range of elevations seen here, within the virtual environment of Google Earth's lunar digital elevation model, is dramatic. From overhead, there's little indication of the uneven height of Menelaus' rim, though its uneven height at upper left is close to the global average. Serenitatis basin (beyond the ejecta blanket of Menelaus, about thirty kilometers away) quickly levels out to en elevation gradually descending beginning at around -2,700 meters. But in the shadowed interior of Menelaus, about 10 km away, there are areas below -4200 meters. The featured image square is overlaid on the LROC NAC observation from which it was sampled which, in turn, is set within a regional WAC monochrome mosaic from many LRO observation opportunities [NASA/GSFC/Arizona State University - Google Earth (v.5.3)].
Posted by Joel Raupe at 5:29 PM