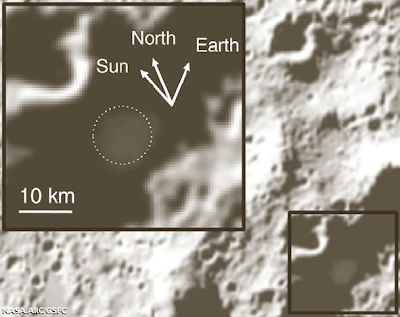 Bullseye on the Moon -- the LCROSS impact site at Cabeus, October 9, 2009. Along with 50 percent more water on the Moon than the best previous estimates, the Centaur stage impact kicked up as much Mercury as water [LCROSS/NIR].
Paul D. Spudis
The Once & Future Moon
Smithsonian Air & Space

A year ago, the LCROSS (Lunar CRater Observation and Sensing Satellite) mission team announced the detection of water in the impact plume produced after the Centaur separated from the Lunar Reconnaissance Orbiter (LRO) and crashed into the Moon. We now have more detailed information on the water and some other substances detected during that event. Some of these elements and compounds were expected, others are very strange indeed.

Because the spin axis of the Moon is perpendicular to the plane of its orbit with respect to the sun, the Moon’s poles get grazing solar illumination. This means that the floors of craters and low areas are in permanent shadow and extremely cold. The DIVINER instrument on LRO measured these temperatures for the first time and found some areas as cold as 25 Kelvin (25° above absolute zero, -273° C), making them colder than the estimated surface temperature of Pluto. Because these areas are so cold, any molecule or atom of a volatile substance that gets into them is trapped. These dark areas are referred to as “cold traps” where, over very long periods of time (billions of years) significant amounts of these elements and compounds might accumulate.

Since water is one of the most abundant compounds found in the Solar System, we expected some accumulation of it at the lunar poles. It was on this basis that scientists have been searching for water ice on the Moon for the past 20 years, using a wide variety of techniques, including spectral reflectance, radar, neutron and gamma-ray sensing and ultraviolet imaging – all techniques done remotely from space. Landing at the poles and surveying the lunar surface to actually see what was there, was next on the list.

Just after it has been relegated to a “been there, done that” status, the Moon again shows us we have a lot to learn about its history, physical state and the potential value of its resources. We must take the initiative to learn more as the Moon is crucial in developing and advancing a sustainable space faring infrastructure.

A plan to soft-land a long-lived rover near the poles and conduct an extended surface mission surveying polar resources was discarded when the Ares rocket became the focus of NASA’s lunar return effort. A smaller mission was improvised to hurl an impactor (the spent upper stage of the rocket that launched the Lunar Reconnaissance Orbiter) into the polar deposits so the spacecraft could analyze the material shot off into space from the collision. Although this is still “remote sensing” of the deposits, at least the material would be ejected out of the dark, cold regions into open space where we might get a look not only at the water but also some other volatile substances that might be there.

In lunar terms, this is a very odd association of materials. Whereas we had found these elements and compounds in the returned lunar rock samples (some in vanishingly small quantities), the presence of significant amounts of ammonia and methane is significant; these gases are common components of cometary nuclei. One idea about the origin of water ice at the poles of the Moon is that it is derived largely from comets, which have continually hit the Moon over geological time. An alternative model suggests that most of the volatiles of this cometary debris are lost to space and the water and hydroxyl (OH) molecules found on the lunar surface come instead from the interaction of solar wind hydrogen with metal oxides in the lunar soil. In this model, heat provided by micrometeorite impact causes the solar wind hydrogen to reduce the metal oxides into native metal (like Fe0) and OH, which attaches itself to mineral faces. This hydroxyl is widespread over the lunar surface and was mapped by the Moon Mineralogy Mapper on the Chandrayaan-1 spacecraft over a year ago.

The newly published LCROSS data showing large amounts of volatiles normally associated with comets strongly suggest that at least some of the lunar water is of cometary origin. However, the detection of large amounts of free hydrogen (H2) in the ejecta plume supports significant preservation of solar wind hydrogen in the cold traps as well. It appears that both sources contribute to the water on the Moon and more analysis is necessary to determine which process is responsible for what fraction of the deposits. The clear message of the new work is that the processes and history of lunar volatiles are complex and poorly understood. Once again, the Moon shows us that its history, as well as its current state, is richer and more nuanced than we had thought.

The LCROSS results indicate that a variety of useful substances are present in the polar cold traps. Water is our principal object for future resource extraction, being one of the most valuable and readily available substances for spaceflight imaginable (i.e., a life-support consumable, a medium of energy storage and rocket propellant). However, both ammonia and methane have a variety of industrial uses, as well as being ready sources of nitrogen and carbon, two elements essential for the support of human life. Sulfur is also a useful element and appears to be present in fair quantity as both native sulfur and sulfide. Some reports suggest that the high concentration of mercury makes lunar water unusable; this impression is incorrect. Impurities can be removed from harvested polar water easily through the technique of fractional distillation, a common industrial process on the Earth for hundreds of years.

Some of the components of the polar suite are perplexing. For example, silver (Ag) shows a very strong peak in the uv-vis spectra. In lunar samples, silver is extremely sparse, occurring at the parts per billion level. Mercury (Hg) is also rare in lunar samples but it is a very volatile substance and the processes that preserve volatiles in the cold traps would work to increase and concentrate mercury at the poles relative to equatorial areas of the Moon. But silver is not volatile (its melting temperature is about 1000° C), so why would it concentrate at the poles? With such bizarre associations, scientists will be looking over this new data with keen interest. To determine the composition, physical nature and distribution of these deposits, a robotic surface rover needs to be sent into the polar cold traps to take detailed measurements.

Just after it has been relegated to a “been there, done that” status, the Moon again shows us we have a lot to learn about its history, physical state and the potential value of its resources. We must take the initiative to learn more as the Moon is crucial in developing and advancing a sustainable space faring infrastructure.