Those whose interests include lunar magnetic anomalies, and rilles or faults, have long been intrigued by the Sirsalis crater group and the Moon's longest rille nearby, Rimae Sirsalis. From Earth our perspective of the highlands southwest of Oceanus Procellarum, where these features abide, is highly foreshortened, and a bright nearly Full Moon overwhelms the eye and our optics by the time the sun finally rises over the extensive area haunted by the Sirsalis features. Nevertheless, the thin clear line slicing its way from the limb northeast into the Procellarum depths draws the eye, especially during favorable libration.

A sub-satellite released by Apollo 16 traced out a crustal magnetic field associated with Rimae Sirsalis that was unusual even for the Moon. Over several high altitude passes the influence of the field was found to be tightly associated with the surface feature, more so in the highland west than where it disappears under Procellarum. The field was indicative of magnetized rock, either molten or ground up, having long ago pushed up from deep within the Moon along a very long and apparently very deep line.

Perhaps the Sirsalis fault is the remnant of a kind of plate tectonics that lasted only a very brief time in the Moon's early history. The kind of bright and fresh optical immaturity of surface regolith, the swirl albedo patterns seen under the influence of lunar magnetic anomalies elsewhere is more generalized here, either tightly associated with the surface features of the fault line, if these exist at all.

The magnetism associated with the Sirsalis fault has been discussed at length by Hood, Halekas and Head, to name just a few of the more prominent sources. The Sirsalis fault may be an intrusion, a dike at one time tapping into the lunar mantle and running upwards from at least 300 km below.

Perhaps more recent activity, after having been less than gently "jostled" awake by huge impacts more recently in its history, can explain some of the history seen at the surface. We can see the surface manifestation of this deep running but very thin (4 km) feature has to be older than Mare Orientale. In the perspective view below, grooving etched out radially from the center of the Orientale basin, more than 900 km away. That event, more than 3 billion years ago, superimposed its influence on the older rille.

In the image above (better seen here), 42 km-wide Sirsalis (12.5°S, 299.6°E) and it's older , less deep companion crater (a model of superposition all by themselves) stand by to the north as the fault passes under the ejecta blanket of a smaller, younger pair of super-positioned craters. Further along, the fault clearly passes over the rims and through the interior of another much older crater.

Creating as detailed a mosaic of the upper extremes of the Rimae Sirsalis, putting the whole system into the context of a single image, is a challenge even for LRO's Wide Angle Camera (LROC WAC). For the moment, we'll satisfy our curiosity with outstanding telescopic views and an artificial perspective view conjured up below. 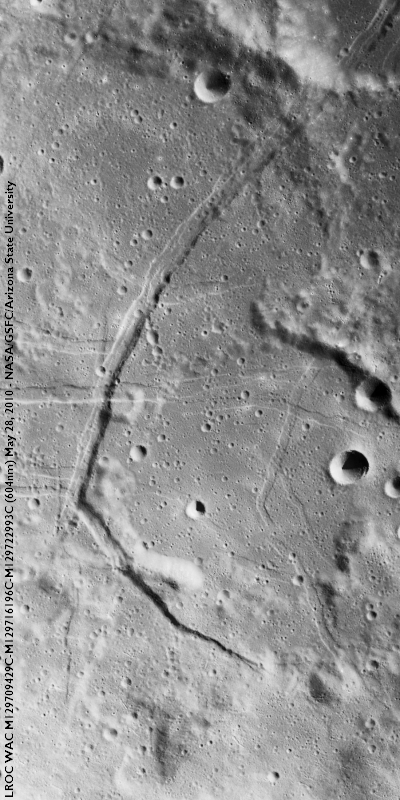 The broad plain where the Rimae Sirsalis "crack" apparently originates, showing the perpendicular "grooves" that radiate from the basin-forming impact that excavated Mare Orientale, centered more than 900 km to the northwest. This closer look, courtesy of LROC Wide Angle Camera observations last May, shows much more was happening here when the Orientale impactor ejected its debris fan 3.1 billion years ago. More than a shockwave, the ejecta that returned to the surface here was molten, rebounding into pools and eventually channeling down the trace of the rille and northeastward toward Procellarum. Additionally, the weight of liquid that reformed the surface here appears to have pulled the surface, mirroring the very deep rille's shape, on either side of the broad Rimae Sirsalis valley. LROC WAC M129709429C-M129716196C-M129722993C (604nm), LRO orbits 4248-4250, May 28, 2010 [NASA/GSFC/Arizona State University].