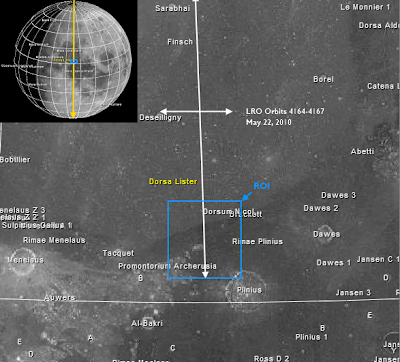 Quick sketch of the contact, separating an earlier inundation that had more completely filled the Serenitatis basin with a newer melt that did not reach the basin's outer edge. This was a test of aesthetics, not spectrometry. No attempt at answering the source of Serenitatis or its fills is implied. [Virtual Moon Atlas v.4].
Cleopas Blount
Lunar Pioneer

Is it possible for rank amateurs to capture the true color of the lunar surface coded into LRO's Wide Angle Camera seven-wavelength color observations?
We've been engaging in some non-destructive testing of this notion, using tools at hand (i.e., free software) to produce monochrome, single-wavelength scenes as something very close to the actual "color" the respective wavelength represents. The result has been encouraging, wetting the appetite for the work more competent investigators will accomplish in coming years.

Our first tests of the heart of Reiner Gamma and the Sulpicius Gallus vent look right, though so much subjectivity, plain old guess work, has been a part of working this way.

For our first large area, we chose a well-known contact, where an obviously darker color of darker basalt that seems (from a great distance) mostly continuous from Tranquillitatis into Serenitatis basin, where it forms an annulus around a much lighter, younger interior plain covering the entire central area of Serenitatis basin. Through filters, photographers on Earth have photographed this clear color difference, visible through good eyes and a modest telescope (at the right illumination).

Coincidentally, LROC principal investigator Mark Robinson used a larger field of view which also included this much smaller area in his discussion of The Color of the Moon, September 10, 2010. There are photographs of excellent, professional quality posted at that link, showing the contact area very clearly. Dr. Robinson also offers information about the causes of these distinct lunar colors.

LROC Wide Angle Camera observations of this contact, just inside the southeastern edge of Serenitatis basin, at proper times in four successive orbital passes of LRO. as the Moon rotated underneath. These were then stitched into a three respective mosaics, each representing one of three visible wavebands among the seven imaged during each session. Then we tinted the individual monochromes with something close to the color of the respective wavelengths as seen by the human eye.

Using the logic of the color wheel, we then lightly transparentified and tested various overlays in differing combinations in the hope of seeing something like we would had we been riding on LRO at those times.

Fortunately, we discovered an orbital HDTV color still of precisely the same area imaged by Japan's Kaguya in our year-old archives. We've posted a thumbnail link to the full image for comparison. 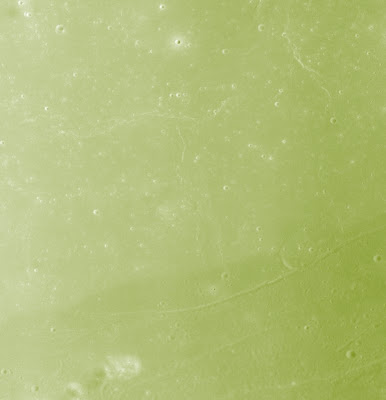 Our second color test began with a monochrome photograph of one of three of seven wavebands collected nearly simultaneously in four successive Lunar Reconnaissance Orbiter Camera (LROC) Wide Angle Camera (WAC) observations. Above, a monochrome image of light at a wavelength of 566nm was tented with a close approximation of what the human eye would see if also tuned to that narrow band [NASA/GSFC/Arizona State University]. 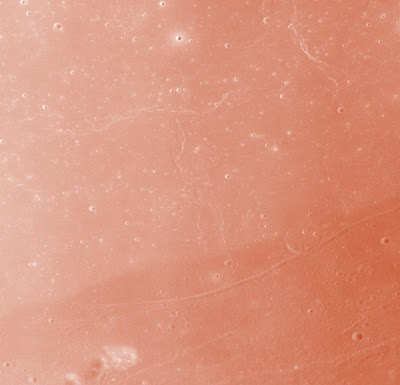 And another of very nearly the same geography (differences were mostly squeezed out during their recomposition), of the 604nm waveband was similarly tented with the visible "color" equivalent (LROC WAC observations took place during LRO orbits 4164-4167, May 22, 2010 [NASA/GSFC/Arizona State University]. 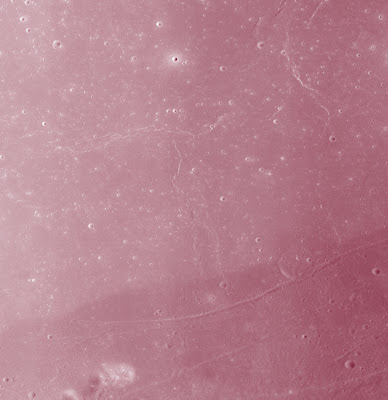 And yet again, from very near to the longest wavelengths visible to the human eye, the same area as "seen" in a third (643nm) waveband. The most obvious feature seen in all these example images of the "confluence" of Tranquillitatis and Serenitatis is Promontorium Archerusia (16.70°N, 22.00°E) at lower left [NASA/GSFC/Arizona State University]. 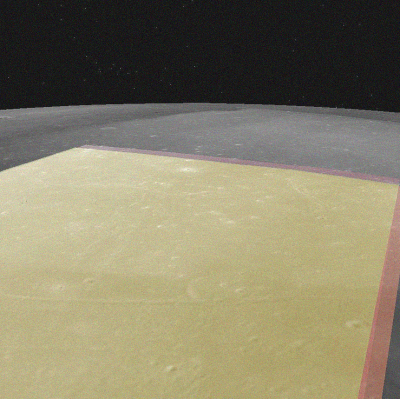 The result... is... interesting, not surprisingly confirming what's well-known. This false color combination of the three visible wavelengths are, however, not very far from true. 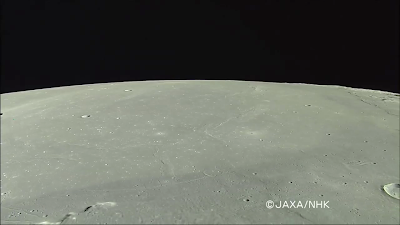 For example, here is a "true-color" HDTV still from Japan's Kaguya in 2008, showing the well-known contact inside the southeastern edge of Serenitatis basin. Because of the proclivities of color monitors, we recommend the reader click HERE (or on the image thumbnail above) to truly compare the test result with the full-sized digital image of the very same area taken from orbit. (The thumbnail does not do the full picture justice [JAXA/NHK/SELENE]. 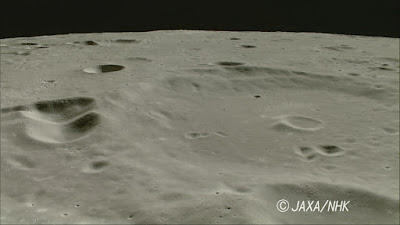 Closer to the Moon, late in its mission, Japan's SELENE-1 (Kaguya) captured some spectacular shots of far side highlands and lowlands under relatively high-illumination. The result cast a yellow tint on the reproductions, most notably those of the interior of South Pole-Aitken basin imaged from less than 45 kilometers, during Kaguya's long, low terminal spiral into the Gill crater region [JAXA/NHK/SELENE].
The sandy greens, and especially the "reds," derived in our own amateurish compositions from LROC WAC monochromes from three visible wavebands should rightly be disputed.

They don't meet our expectations either, even when compared to true-color HDTV images from Japan's lunar orbiter SELENE-1 (Kaguya) in 2008 and 2009. Those who have been in lunar orbit described those spectacular videos and stills as being similar to their own experiences.

Nevertheless, careful consideration has to be given to illumination, surface composition, the angle of incidence, altitude. etc., because the color of the Moon appears quite different here on Earth than from orbit, or on the surface, and different still from "up-sun, down-sun" or under high-noon Sun. The bright anorthosites of the highlands looks very different than the plains, as everyone knows, so the "red" in Reiner Gamma's stain, posted earlier, may represent a higher ferrous oxide presense in all its manifestations, but it's more likely representative of poor tuning on our part.

What is the color of the Moon? There's no precise answer, only a wide range of possibilities. One things is certain, however. The Moon is not Black and White.
Posted by Joel Raupe at 1:36 AM