The largest volcano on the Moon

The Heart of the Marius Domes (27.2 km field of view), from LROC WAC M116683214ME (December 29, 2009), much as they would appear as the morning terminator begins its sweep across the central Oceanus Procellarum, today, October 19, 2010 [NASA/GSFC/Arizona State University].
Sunrise at Marius Hills is a significant time for Moon watchers, even for those equipped with modest telescopes. The myriad domes there, only a bit higher in profile than the rolling elevation of the surrounding, vast basaltic plains of Oceanus Procellarum are briefly very starkly highlighted by long shadows. Very soon after, the terminator continues it endless westward, march and the domes (near 12.0°N, 306°E) quickly become difficult to see, overwhelmed by brighter albedo contrasts as a chief marker of topography under a high sun.

But the Sun was less than two degrees over the east when LRO swept up the dark scene above, much as it should be for the next few hours today, Tuesday, October 19, 2010.

In the long shadows above is the "Heart" of the Marius Domes, where a sinuous rille winds between the two largest domes of an enormous volcano China's Chang'E-1 investigators have labeled "Yutu." LRO Laser altimetry (LOLA) shows the many hundreds of domes west of Marius crater are clustered atop a larger bulge near the center of the Procellarum expanse.

No one has yet definitively identified Procellarum as a typical, fully formed round basin, though there are many theories, including the Gargantuan impact theory, where Procellarum originates as part of an impact, centered in northeastern Mare Tranquillitatis, whose outer circumference is larger than the entire Near side as the original source of the Moon's Near and Far side discontinuity.

Whatever the source of Procellarum, we know it's huge expanse was covered by molten flows in many places at many times. Thankfully, the occasional asteroid, comet or large meteor has pre-excavated the Procellarum floor, uncovering the history for future definitive dating. 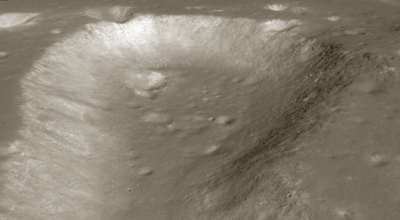 Perspective view of the Constellation Region of Interest landing zone at the Sinuous Rille A "cobra head" formation in the Marius Hills, derived from LROC Narrow Angle Camera Digital Terrain Models [NASA/GSFC/Arizona State University].
LRO and the others building the huge new legacy of an international fleet of 21st century orbiters, are allowing investigators a closer look at the Marius Hills, and in a wider context - tied into neighbors like the Reiner Gamma swirl, the surrounding plains typified by minerals found nowhere else on the Moon, and perhaps even the Aristarchus Plateau and Mons Rümker. A casual glance at Oceanus Procellarum appears to show a huge semi-circle lunar "sea" devoid of anything as dynamic as "storms," but there is much more to be seen here for the patient observer.

Marius Hills is the largest volcanic dome field on the Moon. The region is an area of high interest because it contains approximately half of the Moon's known volcanic domes. These domes range from 200-500 meters in height. In comparison, the Hawaiian volcano Mauna Loa, which is the largest shield volcano on Earth, is 17,170 meters high. This LOLA image covers the area of the Moon from 9.5 - 17N°, and 303.5 - 311°E [NASA/GSFC].
Posted by Joel Raupe at 7:28 PM