Can you located the "seemingly" big rock and craggy crater in the television mosaic returned by Surveyor 7 in the 2010 picture above? Can you see the shadow cast by the square solar panel standing on a mast above the Surveyor tripod landing platform? 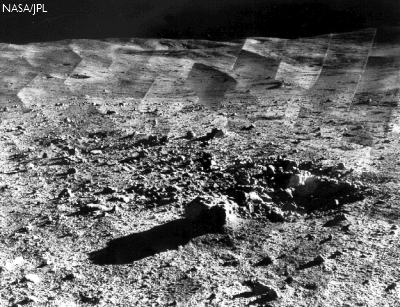 Thanks to Sam Lawrence of Mark Robinson's LROC team at Arizona State University for maintaining an excellent, definitive list of human artifacts they have managed to locate on the lunar surface, using the Narrow Angle Camera (NAC) on-board LRO. By the time the scene above was imaged, on February 4, 2010 (zipping overhead at around 1.6 km per second, from an altitude of only 46.32 km), Surveyor 7 had been sitting on the Moon here, north of the Tycho for 42 years, 25 days, 14 hours, 25 minutes and 57 seconds. That means Surveyor 7 has been patiently sitting here through 568 blistering hot lunar days and super-cold nights, exposed to virtual vacuum and continuously bombarded by cosmic rays, solar wind and micrometeorites.

Because we have a documented record of the spacecraft's condition, up until losing contact with it 65 hours after its arrival here, and especially prior to its launch, chance are good Surveyor 7 (like other human artifacts on the Moon, located in a variety of places that may experience slightly different conditions, holds a pretty valuable record as a Long Duration Exposure Facility, something worth preserving for very close examination. Though this same situation - on a much shorter time scale - went into the decision to land Apollo 12 at the earlier landing site of Surveyor 3, this was secondary to testing Apollo's ability to land at a pre-determined target, and not just somewhere close. This test was a phenomenal success, vital to later missions that would land in tight spots, after negotiating their way over mountain ranges. When Conrad & Bean retrieved the television camera and robotic arm from Surveyor 3, they were examined with microscopic precision, over the course of nine months.

The report (large .pdf) proved to be a cautionary tale for future missions with the purpose of preserving these priceless baseline records of decades of exposure, some likely to be very delicate. Whether there was any accumulation of dust from the dynamic lunar exosphere on Surveyor 3 was impossible to discover, though that might also have been lost in handling anyway. Though, again, the value of Surveyor 3 as a LDEF was secondary to the Apollo 12 mission, it was eventually found that what minor pitting and paint blistering found on these parts were probably a result of the high velocity dust and debris kicked up by the descent and landing of Apollo 12. Even if Conrad & Bean had landed even closer to their intended target, a little shorter of the shallow crater where Surveyor 3 had been for thirty months, a similar contamination was inevitable.

Because of what has been since been surmised about the likely dynamism of the lunar exosphere, the migration of charged dust, and also because of a far more lengthy record of all the other conditions experienced by Surveyor 7 and the other artifacts - particularly those soft-landed - it's now considered important that future missions arrive from what once would have been considered a very great distance. Approaching these valuable "LDEF's" slowly, low to the ground is mandatory. It's also accepted that the infamous dust and debris fans kicked up by the arrival of manned and unmanned landings accelerated many particles to orbital, even escape velocity. Even arrivals at a modest distance, just over the horizon, is now considered certain to complicate a record waiting to teach us about the conditions on the Moon over an appreciable period.

As an aside, on March 21, 2010, I speculated the following image might also be of Surveyor 7. But, after a close examination it's clear I was mistaken. And after taking a look at the entire frame from which Sam Lawrence's definitive identification above was cropped, there are natural objects in the vicinity that, under the right illumination, might look a lot like the still-strange (to me) looking "thing" found in M111668133LE. 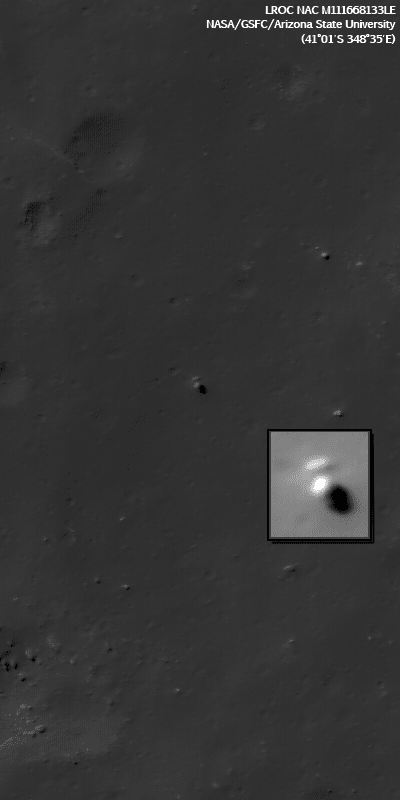