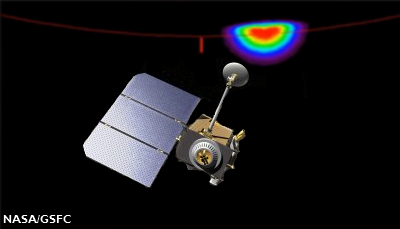 Investigators and teams operating advanced instruments flying on-board Lunar Reconnaissance Orbiter mapped the impact of the LCROSS impactor and its aftermath, October 9, 2009. Their full reports were discussed October 21, 2010, coincident with being published in the journal Science. LRO approaches the impact, seen as a true false-color map of the measured dissipation of heat 21 seconds after the impact in the permanently shadowed region of the Cabeus crater group [NASA/GSFC/UCLA/SVS].
Bill Steigerwald
Goddard Space Flight Center

Last year on October 9, NASA's LCROSS (Lunar Crater Remote Observation and Sensing Satellite) intentionally crashed its companion Centaur upper stage into the Cabeus crater near the lunar south pole. The idea was to kick up debris from the bottom of the crater so its composition could be analyzed. The Centaur hit at over 5,600 miles per hour, sending up a plume of material over 12 miles high.

The two missions were designed to work together, and support from LRO was critical to the success of LCROSS. During impact, LRO, which is normally looking at the lunar surface, was tilted toward the horizon so it could observe the plume. Shortly after the Centaur hit the Moon, LRO flew past debris and gas from the impact while its instruments collected data. 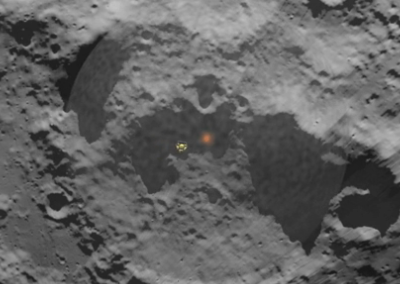 The LCROSS Shepherding and Sensing module immediately follows the empty Centaur impactor, returning data to Earth on the latter's impact and the formation of a 30 meter crater seconds before its own impact nearby. LRO approached and passed the relatively "water-rich" 72 square km permanently shadowed target and orbited nearly overhead the following orbit, measuring the signature of both impacts. Both vehicles had been launched together the previous June. (LRO, still in orbit, has now orbited the Moon more than 6000 times) Scene taken from new animation released by NASA, October 21, 2010 [NASA/GSFC/ARC].
"Since observatories on Earth were also planning to view the impact, there were a lot of constraints on the location -- the impact plume had to rise out of the crater and into sunlight, and it had to be visible from Earth," said Chin.

Prior to the impact, LRO's instruments worked together to map and provide details on the polar regions, according to Chin. For example, LRO's Lunar Orbiter Laser Altimeter (LOLA) instrument built up three-dimensional (topographic) maps of the surface. This data was plugged into computer simulations to see how shadows change as the Moon moves in its orbit, so that regions in permanent shadow could be identified. The Lunar Reconnaissance Orbiter Camera (LROC) helped by making images of the actual regions of light and shade, which were used to verify the simulation's accuracy. Finally, LOLA measured the depths of polar craters to find areas where the impact could still be seen from Earth.

Since hydrogen is a component of water, maps of lunar hydrogen deposits are useful for finding areas that might hold water. Preliminary hydrogen maps were provided by the spacecraft's Lunar Exploration Neutron Detector (LEND) instrument. Regions that had relatively high amounts of hydrogen were identified as the most promising for the impact.

"Over a year ago, we formally suggested Cabeus to the LCROSS principal investigator," said LEND principal investigator, Igor Mitrofanov of the Institute for Space Research, Moscow. "According to our current data, the regolith within the Cabeus impact crater may have the highest content of water anywhere on the Moon, perhaps up 4.0 percent weight."

"Originally, the LCROSS team was going with a site further north than the Cabeus crater, because it was better for Earth visibility," said Chin. "However, LEND revealed that the area did not have a high hydrogen concentration, but Cabeus did. Also, Diviner showed that Cabeus was one of the coldest sites, and LOLA indicated it was in permanent shadow. So, we were able to inform the decision to aim for Cabeus further south -- while it was a little less visible from Earth, Cabeus was ultimately better for what we were trying to find."

Temperature maps from LRO's Diviner instrument were also crucial to identify where the coldest places were.

David Paige, principal Investigator of the Diviner instrument from the University of California, Los Angeles, used temperature measurements of the lunar south pole obtained by Diviner to model the stability of water ice both at and near the surface.

"The temperatures inside these permanently shadowed craters are even colder than we had expected. Our model results indicate that in these extreme cold conditions, surface deposits of water ice would almost certainly be stable," said Paige, "but perhaps more significantly, these areas are surrounded by much larger permafrost regions where ice could be stable just beneath the surface."

"We conclude that large areas of the lunar south pole are cold enough to trap not only water ice, but other volatile compounds (substances with low boiling points) such as sulfur dioxide, carbon dioxide, formaldehyde, ammonia, methanol, mercury and sodium," Paige added.

UCLA graduate student and Diviner team member, Paul Hayne, was monitoring the data in real-time as it was sent back from Diviner. 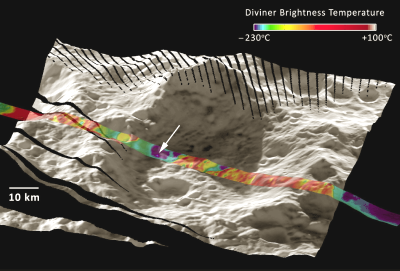 Diviner brightness temperature swath acquired about 90 seconds after the LCROSS impact, the location of which is indicated by the white arrow. Based on the Diviner measurements, the impact site was heated to more than 380°C (1,300°F) Click HERE for larger view [UCLA/NASA/JPL/GSFC].
"During the fly-by 90 seconds after impact, all seven of Diviner's infrared channels measured an enhanced thermal signal from the crater. The more sensitive of its two solar channels also measured the thermal signal, along with reflected sunlight from the impact plume. Two hours later, the three longest wavelength channels picked up the signal, and after four hours only one channel detected anything above the background temperature."

Scientists were able to learn two things from these measurements: first, they were able to constrain the mass of material that was ejected outwards into space from the impact crater; second, they were able to infer the initial temperature and make estimates about the effects of ice in the soil on the observed cooling behavior.

Another LRO instrument, the Lyman-Alpha Mapping Project (LAMP), used data on the gas cloud to confirm the presence of the molecular hydrogen, carbon monoxide and atomic mercury, along with smaller amounts of calcium and magnesium, all in gaseous form.

"We had hints from Apollo soils and models that the volatiles we see in the impact plume have been long collecting near the Moon’s polar regions," said Randy Gladstone, LAMP acting principal investigator, of Southwest Research Institute (SwRI) in San Antonio, Texas. "Now we have confirmation." 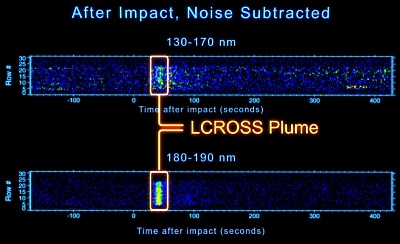 The Lyman Alpha Mapping Project (LAMP) ultraviolet spectrograph onboard LRO observed the LCROSS plume as far-ultraviolet emissions from the fluorescence of sunlight by molecular hydrogen and carbon monoxide, plus resonantly scattered sunlight from atomic mercury, with contributions from calcium and magnesium. The observed light curve is well simulated by the expansion of a vapor cloud at a temperature of ~1000 kelvin, containing ~570 kilograms (kg) of carbon monoxide, ~140 kg of molecular hydrogen, ~160 kg of calcium, ~120 kg of mercury, and ~40 kg of magnesium [NASA/LRO/SwRI].
"The detection of mercury in the soil was the biggest surprise, especially that it’s in about the same abundance as the water detected by LCROSS," said Kurt Retherford, LAMP team member, also of SwRI.

"The observations by the suite of LRO and LCROSS instruments demonstrate the moon has a complex environment that experiences intriguing chemical processes," said Richard Vondrak, LRO project scientist at NASA Goddard. "This knowledge can open doors to new areas of research and exploration."