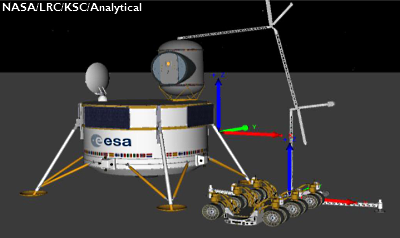 This study investigates the feasibility of using a heavy-lift variant of the Lunar Surface Manipulator System (LSMS-H) to lift and handle a 12 metric ton payload. Design challenges and requirements particular to handling heavy cargo were examined. Differences between the previously developed first-generation LSMS and the heavy-lift version are highlighted. An in-depth evaluation of the tip-over risk during LSMS-H operations has been conducted using the Synergistic Engineering Environment and potential methods to mitigate that risk are identified. The study investigated three specific offloading scenarios pertinent to current Lunar Campaign studies. The first involved offloading a large element, such as a habitat or logistics module, onto a mobility chassis with a lander-mounted LSMS-H and offloading that payload from the chassis onto the lunar surface with a surface-mounted LSMS-H. The second scenario involved offloading small pressurized rovers with a lander-mounted LSMS-H. The third scenario involved offloading cargo from a third-party lander, such as the proposed ESA cargo lander, with a chassis-mounted LSMS-H. In all cases, the analyses show that the LSMS-H can perform the required operations safely. However, Chariot-mounted operations require the addition of stabilizing outriggers, and when operating from the Lunar surface, LSMS-H functionality is enhanced by adding a simple ground anchoring system. 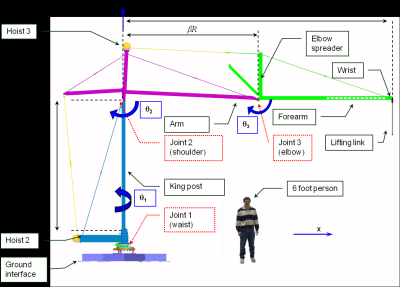 Lunar Surface Manipulator System (LSMS) naming conventions.
As we consider returning humans to the Moon with a view towards building an outpost to enable a permanent human presence, it is important to consider the means by which lunar surface system elements and other cargo will be offloaded from the lunar lander as well as handled on the surface. In particular, methods to offload heavy cargos, such as surface habitats, from lunar landers and to manipulate that cargo on the surface of the Moon need to be investigated. Previous studies have focused on using a Lunar Surface Manipulator System1 to offload cargo up to ~ 6 metric tons and the All-Terrain Hex-Legged Extra-Terrestrial Explorer (ATHLETE) for offloading cargos up to the maximum lander capacity. In this study, we investigated the use of a Lunar Surface Manipulator System (LSMS) that has been modified to handle a 12 metric ton payload, which is consistent with the estimated mass of the largest payloads currently used in NASA’s Lunar Campaign Analysis.

This study focused on two key areas: a) identifying necessary design modifications to enable the LSMS to handle the heavier cargo mass and to ensure the LSMS could reach all potential cargos from lander, chassis, and surface mounted locations, and b) analyzing payload handling operations with the Heavy-lift LSMS (LSMS-H) to ensure the operations could safely be performed while avoiding a potential tip over situation. As part of the analysis, preliminary calculations were made to identify the safe operation envelope, or tip over boundaries, for several cargo handling scenarios. These initial calculations helped to identify necessary design modifications to expand the safe-operating zone and reduce the likelihood of tip over. The results were then fed into the Synergistic Engineering Environment (SEE). The SEE was used to simulate each offloading scenario, dynamically calculating the system center of gravity (CG) (assuming a constant gravity field) and comparing the CG location to the tip over boundary.

In addition to the operational focus areas described above, this study also sought to understand the correlation between lunar cargo handling equipment and procedures using their terrestrial equivalents, particularly those that may facilitate remote offloading operations without the presence of crew on the lunar surface. As several of the payload handling operations will potentially occur in preparation for crewed missions, it is essential that payload acquisition and release be as simple and safe as possible to reduce risk to lunar equipment. Several benefits are identified that may be realized by incorporating commonality into the development of lunar and terrestrial flight handling hardware and procedures.

Devices for lifting, translating and precisely placing payloads are critical for efficient Earth-based construction operations. Recent and past studies have demonstrated that devices with similar functionality will be needed to support lunar outpost operations.

Thanks for sharing, it was interesting to read!